About Worship in Pink 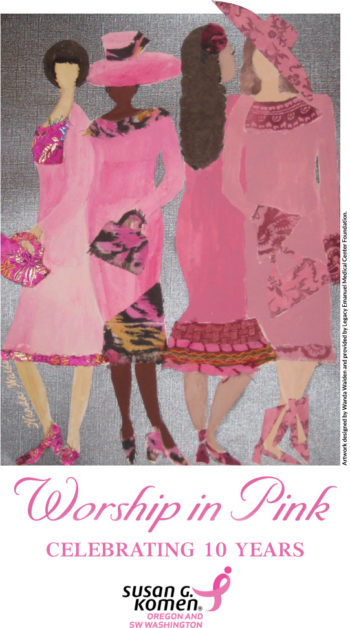 About Worship in Pink

Worship in Pink began in 2010 as Pink Sunday, an information event held in the atrium of Legacy Emanuel Hospital on an afternoon in October. Passinart: A Theatre Company directed this free public event, with a mini grant from Susan G. Komen Oregon and Southwest Washington and additional financial support from Legacy Health, to reach Portland’s Black / African American community. Kathy Kendrix, of Empowerment Group and PassinArt A Theatre Company collaborated in organizing the event, and participants included local churches and community members. Pink Sunday involved several community booths and breast cancer information, as well as a live program.

In 2011, Susan G. Komen Oregon and Southwest Washington awarded Legacy Health a community grant to expand upon Pink Sunday in the Black / African American faith-based community, and Worship in Pink was born. Churches in Multnomah, Clackamas, Washington, and Clark Counties were recruited to hold activities with their congregations, on a weekend in October, centered on the importance of screening in the early detection of breast cancer. Over the next few years, with funding from Komen, volunteer Ambassadors were trained by Legacy and Komen on the breast health message. They then shared this information and resources with their congregations during Worship in Pink activities, and churches of all demographics also participated. Community organizations participated in Worship in Pink hosting activities for their networks. Hair salons and barbershops shared breast health information with their customers.

In 2015, Worship in Pink was internalized as a mission program of Susan G. Komen Oregon and Southwest Washington. Activities were expanded to fill the entire month of October. In addition to the traditional Worship in Pink program, a few churches, with predominantly Black / African American congregations, were asked to participate as African American Initiative Pilot Program Churches. The volunteer Ambassadors at these churches helped to get screened their congregants who had self-selected for assistance in receiving a mammogram. The African American Initiative Pilot Program was a successful addition to Worship in Pink, from 2015-2017.

Beginning in 2018, with the conclusion of the pilot program, participating churches, once again, joined Worship in Pink as Partners. We provide Worship in Pink Partner Churches with educational materials and their volunteer Ambassadors are trained to share with church congregants the importance of screening in the early detection of breast cancer.