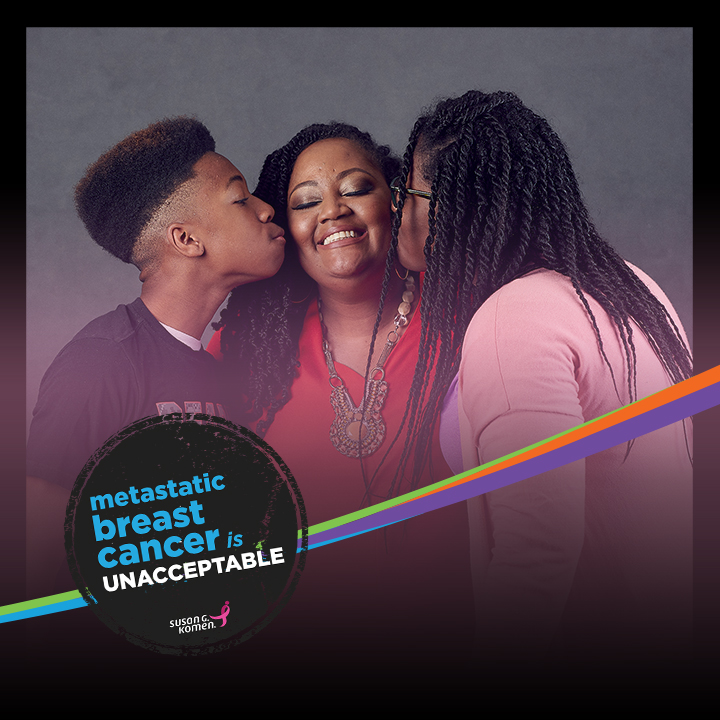 July 18, 2011 is a day Tai will never forget. At just 31 years old, she was told that she had Stage 3 breast cancer. After 18 rounds of chemotherapy, a bilateral mastectomy, and radiation therapy, she remained hopeful that her cancer would be gone for good; however, 6 years later, the hammer dropped: she was diagnosed with Stage 4 metastatic breast cancer in her lungs. To say the news was hard on her family would be a colossal understatement. It’s been a year and a half since Tai was given a 2-year life expectancy and to that she says, “NO WAY!”

“I told my doctor I want to see my kids graduate and start their lives. People like me are living with this every single day, who want a lifetime with our families, not just 2-4 years,” Tai reflected.

Tai acknowledges the presence of breast cancer in her life but continues to live like “[her] life isn’t going to end. She says cancer has been hard for her children to process; however, she makes sure they know how much they are loved, attends their activities to the best of her ability, and as they grow older and more curious about the disease, she incorporates their ideas into her routine and answers their questions.

Though optimistic about life in general and spreading that light to her family and others, Tai knows that at some point, each new care option will eventually stop working.

“It’s that finality that’s scary to think about,” Tai admitted. “That there will be a time when treatment options run out, unless we find the cure[s].”

Tai is passionate about spreading awareness and says part of her motivation to take action comes from being an African American woman.

“Black women have a higher mortality rate when it comes to breast cancer, but we are often left out of the commercials, ads, [and] research opportunities,” she stated.

Though many black women have not shared their breast cancer stories, she continues to share her own, in hopes that it will inspire and encourage these important conversations within the community.

In doing so, Tai wants to say “when I share my story, please don’t feel sorry for me. Just listen, [take action], and don’t give up!”

This past summer, Tai used her voice for the Susan G. Komen Oregon and SW Washington re-imagined Race for the Cure…now the MORE THAN PINK Walk. She represented one of the four pillars of Komen’s work: Research, Care, Community, and ACTION! Tai is a cherished member of the Komen family and we are so honored and excited to see share her story even more in the future!