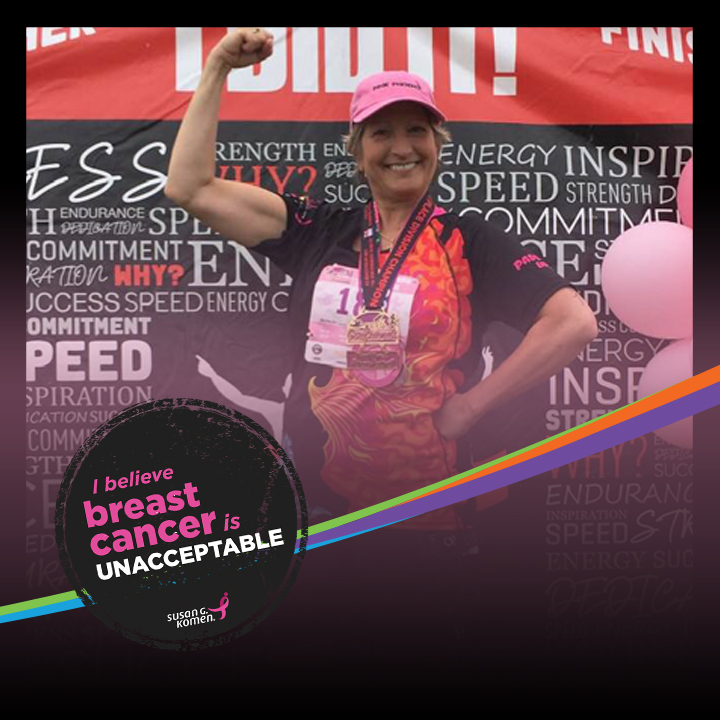 “Cancer didn’t win, and it doesn’t have to beat me while I journey forward.”

At 40 years old, Sioux Kriss was diagnosed with breast cancer. At such a young age, it seemed so incredibly difficult to grasp; however, Sioux never would have imagined the woman she’d become. With a relentless work ethic, team player attitude, and caring soul, Sioux truly has overcome!

Since Sioux’s diagnosis, the most important piece of recovery has been her emotional one. She explained how difficult it was to stop negative and anxious thoughts from taking control.

“My wake-up call started at the Komen Breast Cancer Issues Conference (BCI),” she said. Up to that point, Sioux had kept her diagnosis private. “I didn’t tell anybody, not even my church. I kept everything as secret as I could because I didn’t want anyone labeling me as damaged.”

She said when she arrived at BCI, she walked by one of the vendor booths – it was for the Pink Phoenix Dragon Boat Team. The woman sitting there asked ‘what are you doing to take care of you?’ It was this moment that Sioux listed her roles: “I work, I’m a mom, I’m a wife..” The woman stopped Sioux in her tracks and backed up. She said ‘no no no, what are you doing for you, Sioux?’ This left Sioux speechless.

The woman at the table encouraged Sioux to come try the dragon boat “thing” just once, emphasizing the fact that it’s important to have something to do that’s just for Sioux!

“When I did go to my very first practice I stood next to a 92 year old woman who was a 40 year survivor,” Sioux started. “There she is, this tiny little old lady, exercising as best she could with the biggest grin on her face. That’s when I woke up and realized cancer didn’t win and it doesn’t have to beat me unless I let it.”  This was a key moment in Sioux’s journey. It’s when she realized she was not done – she still had value. Now, 12 years later, she is stronger than ever and a proud member of Pink Phoenix!

Through Sioux’s newfound support system, she was empowered to keep moving forward. Joining Pink Phoenix Dragon Boat Team was was the decision that allowed her to start living again.

“The women i’ve met on the team are like sisters to me, or as one of my teammates calls it…my tribe.”

Sioux says that finding those you connect with will bring you one step closer to authentic peace and happiness. Sioux points out that one of the best parts about Pink Phoenix is that every person on the team completely gets it – no explanation needed.  Her family including her sister and father were present during Sioux’s initial treatment. They took notes, kept facts straight and took care of her; however, once the initial treatment passed, there wasn’t much else her family could add because, as Sioux explained “it was difficult for them to relate.”

Every person goes through their recovery in different ways. Some have different needs and connect with various groups. For Sioux, it was Pink Phoenix that aided in her successful recovery.

“Hospital support groups seemed to be everyone recounting their fears and was more focused on the cancer, which didn’t help me personally,” Sioux stated. “I needed to focus on what I could do moving forward not on what got me there. If you think of an alcoholic trying to get through their AA program, they don’t go to someone who’s never had a drink to help them. They go to someone who’s a sponsor, someone who’s gone through it, and who is also an alcoholic. There’s common ground—a connection. Find a group, a hobby and go do it! Don’t let this diagnosis be a roadblock,” Sioux exclaimed!

To someone recently diagnosed, Sioux recommends seeking out the many resources available. “Remember, you are not alone”. Sioux explained how it’s critical to find faith in something. Specifically, Sioux reflected on the “refocus and reprioritization” of her life as being the biggest blessing. Continuing she sayid, “I was 100% a workaholic before I was diagnosed. I lived, breathed, and ate work. After that is when I realized my family and my own health was more important.”

Sioux says her greatest accomplishment is being “the strongest athlete that I’ve ever been—prior to my diagnosis I would’ve never thought myself as an athlete”. She continues saying “My crew from Pink Phoenix Dragon Boat Team qualified from the Pacific Northwest to go to the world championships in France next year and personally, I completed my first ever mini triathlon!”.

Sioux exemplifies being MORE THAN PINK. From her mental, emotional, and physical recovery, all of us at Komen are inspired. Sioux reminds us that each day is precious and the power a positive support system has. We remember each day is a new day to do something extraordinary for you. So what are you waiting for?!