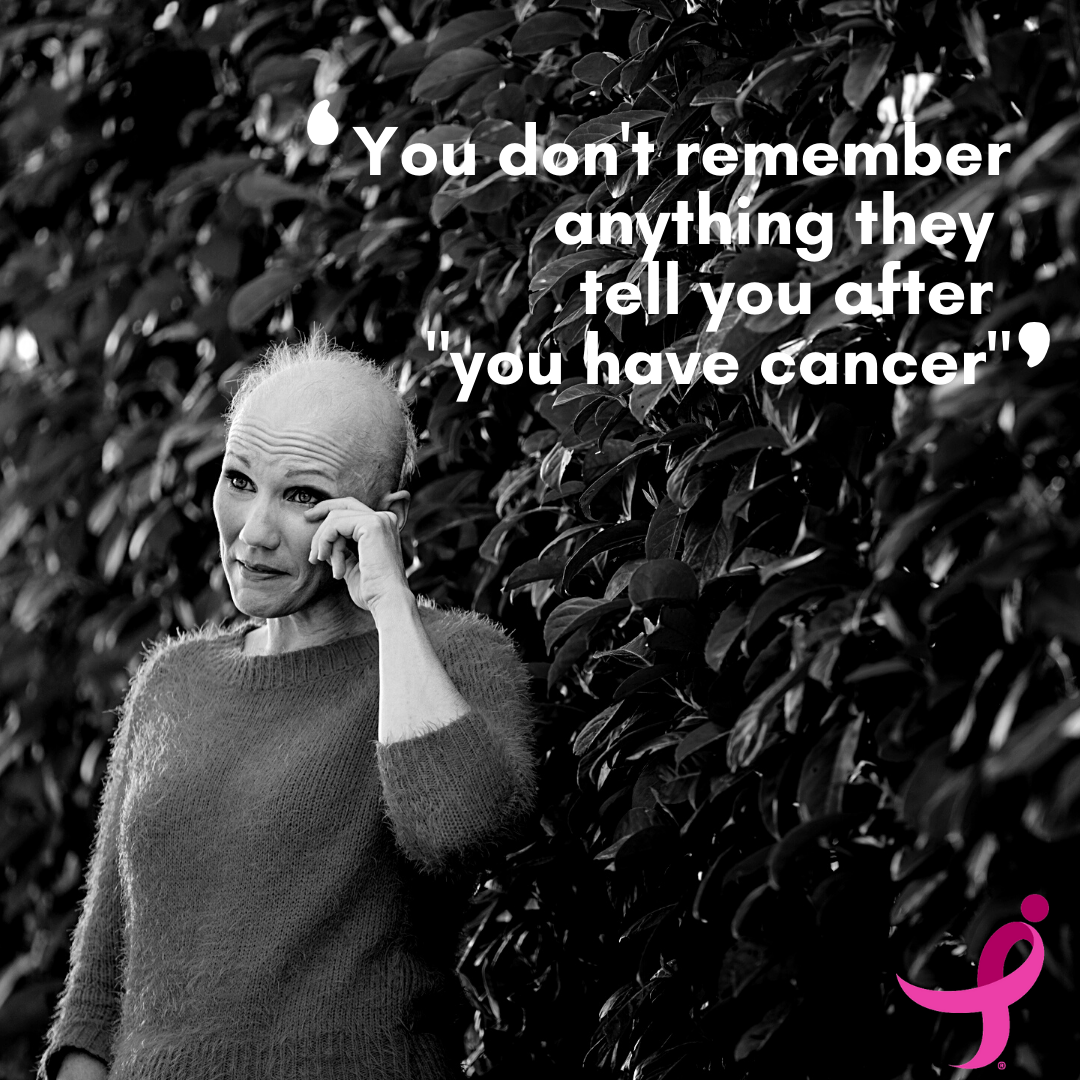 Leslie Ruminski is a strong, active, independent and career woman who enjoys participating in triathlons, doing yoga and exercising at Orange Theory Fitness.

Her life was suddenly turned upside down in October 2019 when the first of three once-in-a-lifetime events occurred:

1. A cancer diagnosis is never on one trajectory. But at the age 44, Leslie got her yearly mammogram. Despite not being symptomatic, no lumps, and no family history of breast cancer, her mammogram reflected cancerous breast tissue, which came a huge surprise after ‘clean & clear’ mammograms every year

Leslie has worked in health care for 27 years, including serving as an oncology social worker, where she supported patients and families who were combating cancer. So, to suddenly be told she had cancer and to be sit in the seat of the patient was a very humbling experience.

“As with every woman who gets diagnosed with cancer, you don’t remember anything they tell you after ‘you have cancer.’ What you do remember is that your friends and family tell you are not going to be alone. That is something that resonated with me. The amount of people that told me you’re not going to be alone and we are going to get through this together”, Leslie reflected.

Once Leslie was diagnosed, her doctors started her treatment immediately. She was scheduled to have a lumpectomy and lymph node removed in November of 2019, on the anniversary of her father’s death. Her surgery was performed on the exact same day as her dad’s death, in the exact same hospital where her dad died from his own cancer battle.

After her surgery, the next step in her treatment plan was radiation; however, her doctors tested her tumor and it came back with an intermediate score for recurrence; which shifted her plans to include chemotherapy prior to radiation.

In January 2020, Leslie started chemotherapy, but it caused some immediate side effects that worsened with the second treatment. Her oncologist then developed a new chemotherapy regimen. The remaining rounds went as fabulous as chemotherapy can go.

Then, the second once-in-a-lifetime event came along:

2. Coronavirus. As Leslie can attest, Cancer and Coronavirus do not mix.

Leslie was scheduled for her 4th chemotherapy treatment at the beginning of the pandemic in March 2020. Her chemotherapy got pushed back in order to comply with social distancing guidelines.
During the first week of the shutdown, there was a lot of anxiety around the pandemic and the hospitals pulled out extensive safety precautions.

As one of the extra safety measures, Leslie could not bring anyone with her to her chemotherapy appointment, so she had to attend alone with no support system around her.

“You could see the strain on the physicians’ and nurses’ faces because this isn’t how they intended to practice medicine. These are people who had been with me, who had held my hand, had put their arm around me and comforted me, and there was none of that physical care that could be shown” said Leslie.

Ten days after her final chemotherapy treatment, with her radiation still ahead, the third once-in-a-lifetime event happened:

3. Leslie’s employment contract got suspended and she lost her job as well as her employer sponsored insurance. This was quite startling and in addition, Leslie’s radiation was delayed to an unknown time at that point because of the pandemic.

“Your world really crumbles down around you, you are already going through a tremendously stressful situation to then add on a global pandemic, be considered in a ‘high risk’ category due to immuno supression drugs and to lose your job and your employer sponsored health insurance is rather traumatizing”

Leslie has learned to pause, and to say “yes” to those who offer to help. Her positive attitude is helping her make sense out of this experience.

Despite everything she has been through, Leslie continues to be a role model for others going through cancer with grace and positivity. She is looking forward to accomplishing her goal of completing another triathlon when life resumes.