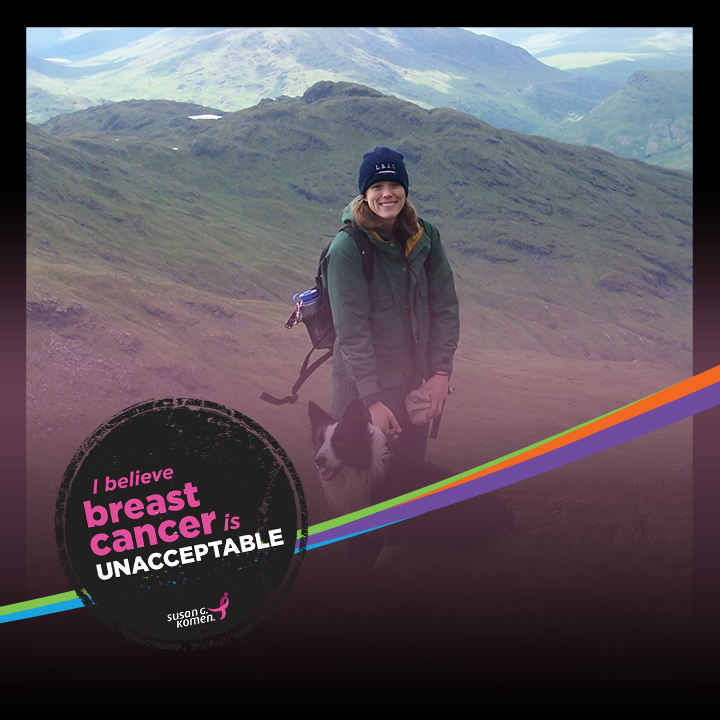 At only 33 years old, Kit Goujon had no reason to believe the lump she found in her breast might be cancer.  She’d always been physically fit and active – in fact, she began rowing at a such an early age that her Grandmother, Martha May, was convinced she would be an Olympian!  So much so that Martha joined an Olympic Supporters Committee which she belonged to for years after it became obvious that Kit was not on the road to the Olympics – even though she kept on rowing.

Instead, Kit became a veterinarian.  That medical training told her not to ignore that lump that was about 1-2 centimeters when she first discovered it.   She went to her doctor who said it was likely a cyst but they did an ultrasound anyway.  Even with that, they decided due to her age they would check on it again in 6 months.  Three months later things got complicated when at her work, Kit suffered a cat bite that ended up landing her in the emergency room.  Her lymph nodes were swollen but that could be attributed to the bite.  She had pain and needed physical therapy so she told her PT nurse about the lump in her breast and indicated it had grown to 5 centimeters.    Still, she was told to wait another few months.  Kit struggled with her inner instincts and knowledge of tumors – she knew she needed to be her own advocate but thought she should listen to her doctors.

Six months later Kit’s doctor decided that the lump needed to be biopsied and the results were that it was malignant and that the cancer had spread to her lymph nodes.   Kit was diagnosed with Stage 3 breast cancer and began her chemotherapy treatment.  1 year ago, Kit had her surgery including a mastectomy and lymph node dissection.  Soon after, she began her radiation.

One month after her diagnosis, Kits biggest cheerleader and beloved Grandma Martha, passed away at 93.   Fighting breast cancer while grieving her Grandmother was very difficult for Kit.  She spent many long nights, wide awake, wishing she’d spent more time with her, caller her more often.  Those were the nights that Kit thought about her own death, would she even make it 40?  A shocking reality when she’d always assumed she would live as long as Martha May.

Those dark thoughts entered her mind while her husband slept next to her, but when he was awake, Marc made sure that Kit laughed every day.  They watched silly YouTube videos, their favorite TV shows and had ice cream every night.

It was also Mark who encouraged Kit to take some of the money that Martha had left her to do something special for herself – in Martha’s memory.    It wasn’t an easy decision for Kit to make, it was an awful lot of money and something only she could use.  But she knew nothing would make Martha happier – than to see Kit beat breast cancer and get back on the water.  You see, Marc convinced Kit to buy a personal Rower, basically a small boat and it’s about as expensive as a car.   It was built to her exact body shape and size.  The Rower was delivered the day Kit got her chemotherapy port put in. On the first day of her chemotherapy treatments, Kit went down to the dock, hugged the boat and made the commitment to get well enough to use it.   That rower became a powerful symbol for Kit as both her motivation to get better and a tribute to Martha.

It was coincidence that Kit happened to join the one of the Row for the Cure’s biggest supporters, Station L, when she moved to Oregon 2 years ago.  But once she called the team to let them know why she wouldn’t be at practice for the coming months, it became immediately clear that she had a tremendous support system from her team.

Kit has concerns for her future as a veterinarian.  Having her lymph nodes removed puts her at risk for lymphedema which means a random cat or dog bite could easily put her in in the hospital.   But while her career is uncertain, she is grateful to be alive and is focusing on that moment of peace on the water.