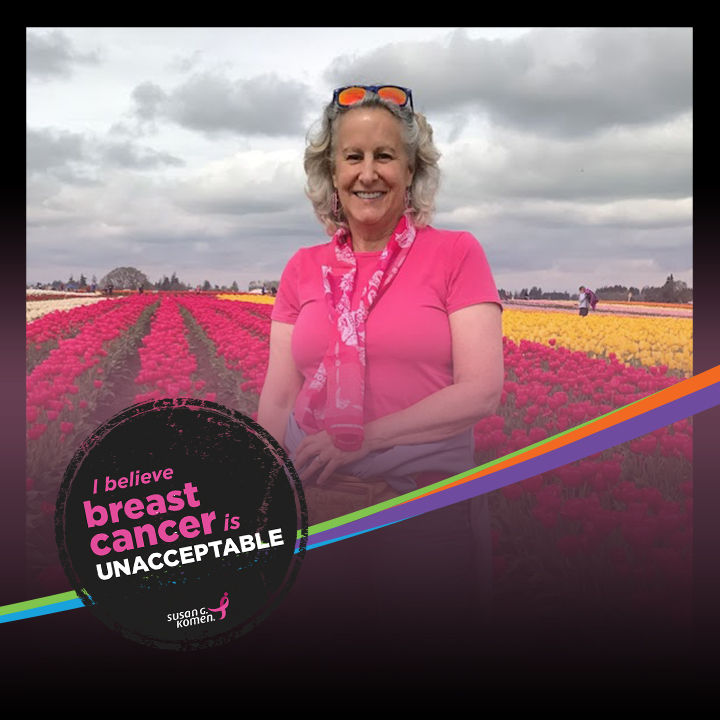 Life is full of surprises.

In 2016, Holly’s husband was diagnosed with prostate cancer; one year later, in February, Holly found a lump, despite her mammogram testing negative. Holly was diagnosed with stage 3 breast cancer, leaving both herself and her husband in shock.

In total, Holly’s care team removed 17 lymph nodes, 6 of which were cancerous.

Despite these difficult times Holly and her husband made every effort to uplift their spirits. They joke that Holly received a boob job when she had a partial mastectomy and reduction of her other side. Holly advocates to always seek the silver lining.

Holly was quite skeptical when she heard about the conference. She saw this gathering as a reminder of her personal pain and fear throughout her tenure with breast cancer.

“Ever since my hair began to grow back, I have wanted nothing to do with breast cancer” she said. “No pink ribbons for me.”

Despite these feelings she decided to attend, in support of her physical therapist who was speaking at the event. Holly’s predictions about the conference were far from true. She encountered a room full of positive, friendly, and supportive individuals. As Holly and others shared their stories to one another, something extraordinary transpired.

Holly mentioned how she handled the side effects of radiation treatment to her nurse; this piece of information later benefited another survivor at the conference. Her doubt immediately melted away and Holly describes the whole experience as “life-changing”.

Holly’s best friend of 41 years gifted her a journal when she was first diagnosed. This friend told her, “You’re going to meet exceptional people along the way that deeply touch your life. You’re going to want to remember those people; write it down.”

That’s exactly what Holly did. Day after day, she allocated time to find the silver linings. Even today, Holly says that reading her journal warms her heart and inspires her. Holly is still adjusting to her “new normal” and maintains the silver linings attitude – working on it daily.

Maintaining her strong faith played a huge role in her battle and survival. “It took me awhile to realize how God was working in my life, but eventually I learned to trust him,” Holly stated. Facing frustration from all corners of life, time and time again prayer gave her hope and peace of mind.

Holly’s biggest take-away was that she no longer needed to deny her battle with breast cancer. With optimism in her voice she said she’s excited for the future.