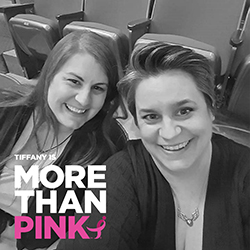 Tiffany’s sister Christina Mazdzer was diagnosed with breast cancer and made the decision to get genetic testing. She and her mother and sister were diagnosed with the BRCA1 gene. Tiffany met with surgeons and decided to get a prophylactic mastectomy. As part of the process, Tiffany received a mammogram that was all clear, but then, an MRI showed something small. They did a biopsy and confirmed that it was a cancerous tumor against her chest wall.

Tiffany was going in for a mammogram every October. She figured that since it was Breast Cancer Awareness Month it would always be a good reminder. Because of Christina’s diagnosis and the genetic testing, Tiffany found her cancer much earlier than had she waited until the next October. They likely wouldn’t have spotted it in a routine mammogram.

People commented on how tragic it was that she and her sister were diagnosed so closely together, but Tiffany says, “It was a blessing. Everything that I went through my sister had gone through just six months earlier.” They were at different hospitals and had different doctors but they could compare notes. Tiffany added, “If I could have taken her diagnosis, I would have in a heartbeat. You can’t be more blessed to have someone so close go through something like this with you.”  Tiffany and Christina even work for the same nonprofit company and said that their offices were incredibly supportive. Tiffany remembers that if she had a hard week, her co-workers would show up to the next meeting with a new hat as a gift.

Tiffany said she tends to compartmentalize things that happen in her life and that works for her.  She treated cancer the same way. “Cancer happened to me, but it’s not my identity,” she continues, “I would have chemotherapy on a Friday, recover over the weekend, and be back to work on Monday.”  Tiffany found strength in the day to day, sticking to normal as much as she could. She recognized that cancer wasn’t going to be with her forever, it was just something that happened.

She believes it is so important that people, who are diagnosed with breast cancer, find a support system that works for them. “It doesn’t have to be the same for everybody,” she added, “You’re a part of this weirdly exclusive club. Many people get this diagnosis, a diagnosis that you don’t want. And, when you become a survivor, you achieve this sort of elite status.” She acknowledges that although it’s an odd club to belong to, you are a part of a community and there is strength in that.

Tiffany laughed as she described the timing of her and her sister’s breast cancer diagnosis as a “Jerry Springer” moment or perhaps more like a “Lifetime movie.” They were close before, but now they are even closer. They shared everything. She wouldn’t wish this disease on anybody, but says, “There’s something oddly special about going through it together.”