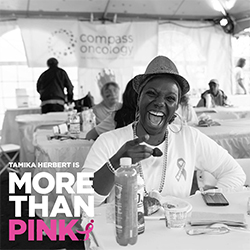 Alone in a new city, Tamika found a lump in her breast at age 36 and believed she would have to handle it on her own. However, she had allies at Komen Oregon and friends who helped her gain perspective, provided her support, and fed her positive spirit. Tamika is More Than Pink. This is how she explains her breast cancer journey.
–
What do you do, how do you react, how do you feel, how do you cope, what is your initial thought process when you receive a diagnosis of breast cancer at the age of 36 years young on October 31? You have no health issues or concerns; you are conscious of your eating habits; you live an active lifestyle so it’s not like exercise is a long distant relative you’ve never met. However, you have breast CANCER! That “C” word we just aren’t supposed to say or talk about as if it’s invisible and doesn’t exist. Well this is what I did as I sat in that room alone with no one physically there. . .I smiled the entire time, a tear trickled down my face at some point, however I continued to smile and said enthusiastically, “Let’s get this party started, what’s next?!” My then physician looked at me strangely and continued to “comfort” me. Death was NOT an option in my mind nor would I stop living life! I already had plans to celebrate the Halloween festivities and kept my plans moving right along. Nothing has changed since that day of October 31, 2013.

In December 2012, I had just relocated from Memphis to Oregon for work. There was no family or close friends in this area, and everyone was back in South Florida, where I was born and raised. My thought process was I found the lump on my own so I’ll just have to deal with this and handle it on my own as well. That meant as few people as possible knowing what road I was about to travel down. Thankfully, I had two people speak to me and assist in gaining a different outlook and perspective to this thing. I credit that to my long time friend of eighteen years Misty Owens and my new, found sister and friend Kandice Louis.

After I released that weight off my shoulders NO ONE is meant to or should carry all alone, I was SO free! I made this journey fun, bright, and positive (not to say there weren’t any gloomy days)! At each chemo treatment, surgery, or anything dealing with this journey, I was constantly posting pictures or videos via social media sharing it with as many people as possible. I continued my active lifestyle exercising as much as my body could tolerate. I pushed back the date of one of my surgeries so I could participate in my first Susan G. Komen Race for the Cure in 2014; I was determined to accomplish this, as well as run the last mile of the race, and I did it all! As soon as I finished my last chemo treatment, I did another first and went snow skiing! Before the chemo took control, I took the power and had a head shaving ceremony complete with dressing up in my heels, makeup completed by the fabulous Alyce Williams, and pictures and videos for days!

I was that person who was so strong, quite optimistic in general, others relied on me, independent and could do it on my own, stubborn at times, needed to be in control of what was around me, prideful and so forth. God has His own way of breaking you down, removing the snakeskin off of your eyes, and finally seeing the one and only TRUE light! I did not want anyone to know of my diagnosis, partially because of those above stated reasons, but even more so I did NOT want any pity, sad faces, or crying. But God places people in your life at times who know you better than you think you know yourself. He also removes people out of your life for whatever reason and gives you lots of loss. . .loss of a best friend of seventeen years; more relationships of people I knew would have my back during this journey; loss of being in control all the time; loss of not needing anyone for much of anything; loss of pride (still being broken down); and ohhhhh. . .I loss my hair!! But during these losses I viewed as being so detrimental and tragic because I felt as though I was losing myself, the reality is that SO much more was gained, and I was finding myself!

I say it often and people look at me as though I’m crazy, but I’m so very THANKFUL for my diagnosis of breast cancer. . .the chemotherapy, the surgeries, the physicians, the sick to my stomach moments, the weight loss, the hair loss, the loss of my breasts, ALL of it! I am thankful! Through all of this, it has made me stronger, more loving, less worried about daily/life issues, more forgiving, and most importantly renewed and restored my faith beyond measures!  It took the diagnosis of breast cancer for me to wake up and see how much God has covered me and loves me. If I continued to be in the dark, how much further would I have traveled blinded? That’s not a chance I’m willing to take for the calling and meaning He has for my life.

I continue to find myself today and embrace my renewed mind. During the course of being healed from breast cancer, other healing took place. No longer would I only “break the silence” talking about breast cancer, but the silence has been broken in other areas of my life. The seal has been broken, the grit has been spewed out, and many are just finding out about the childhood sexual abuse as well as physical abuse during my college years. But for all these obstacles, and many more not mentioned, presented to me during the course of my life. . .I am thankful! It made me know who I belong to, who has been protecting me, who my Father is, and I realized I’ve actually have not loss much of anything. Instead, I continue to gain and find the one and only Tamika Herbert with my Heavenly Father’s guidance! Now that’s what I call a #MultipleSurvivor!!