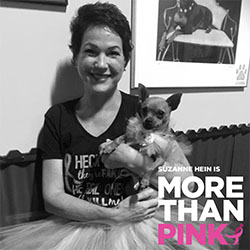 Suzanne Hein was the picture of health. She did not overindulge, exercised regularly, and took care of herself. In March of 2016, Suzanne was taking a bubble bath and discovered a lump. Since she was healthy and had a recent mammogram, she almost did not go to the doctor to have the lump checked out. After her soon-to-be Husband’s urging, she went to the doctor.

Suzanne will never forget the words from her doctor, “highly suspicious for malignancy.” Initially diagnosed with Stage 2 ductal carcinoma, she decided to have a double mastectomy. At the time of the surgery, they found more affected lymph nodes, which meant that chemotherapy would be a necessity after the surgery. Her program also included radiation and reconstruction as well as some related issues that will keep her seeing doctors for a while.

Looking for holistic healing opportunities, Suzanne took art therapy and yoga therapy classes. She valued the opportunity to release and let someone else guide her. In some ways, the disease actually made her healthier than ever before. She has fully embraced a vegan lifestyle and always looks for ways to minimize her stress. She believes everyone can utilize natural remedies to feel better and save their lives. “Do not take your health for granted,” she says, “It can happen to anyone.”

Suzanne has a great outlook on life and does her best to stay positive throughout her breast cancer journey. She decided to keep life as normal as possible. That meant continuing her work schedule as a business owner of LexiDog Boutique & Social Club. Suzanne says, “If I am having a bad day, then I go to the dog playground and just spend time with them.” Suzanne’s own dog Fiona has been a major source of support for her by helping her through her breast cancer journey as well as the loss of her dogs Lexi and Twinkie. She notes, “Dogs do not see cancer. They are not judgmental. They do not care if you have hair or eyelashes, or if you are just sitting sipping soup.”

Suzanne thanks her husband, her family, and the staff at her stores. It was her employees that encouraged Suzanne to put together a Race for the Cure team in 2016. Although Suzanne supported friends at Race for the Cure in the past, the 2016 Race happened to be right before her chemotherapy and she was not sure she was up for it. It meant a great deal to Suzanne to be surrounded by people who knew exactly what she was going through. Suzanne has always been appreciative of Komen Oregon for their awareness, services, and fundraising campaigns. She is very excited about the decision to officially allow dogs to be registered to join Race for the Cure. It is where you will find LexiDog as the Pups in Pink sponsor!