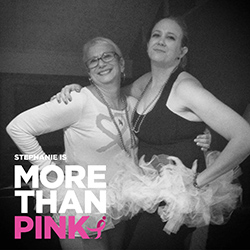 Imagine finding out you have breast cancer on Christmas Eve. Now imagine that the doctor is very busy since he is the only one working on Christmas Eve and all he has time to do is to walk in, say you have breast cancer, and tell you goodbye. This is how Stephanie Lipman received her first breast cancer diagnosis. The doctor barely had time to tell her she had breast cancer. He didn’t explain anything, not even which breast or what stage of cancer. She found out this information by faxing her report to her brother in Los Angeles, who had friends in the medical field, that explained her diagnosis. She received her first diagnosis in 2007 and was in remission by June 2008.

In 2015, she started having stomach pains. A PET scan and a biopsy on her right hip would reveal that she has metastatic breast cancer. Stephanie has been on a couple of different protocols for her Metastatic Breast Cancer.  Another biopsy was needed after her last treatment to better find her a clinical trial. Her MBC has morphed from ER/PR positive HER2 negative profile to triple negative. As you can imagine, Stephanie has been to several chemotherapy appointments, and the hardest part is going alone. She has created a buddy system to help her through those long 6-8 hour treatments by bringing a friend along with her that she calls her “chemo pal.”

In addition to her “chemo pals,” she says that one of the most important things to do after being diagnosed is to tell someone. No one should go alone through this process, and the biggest part of continuing everyday she says, “Always keep a positive attitude because your body listens to your inner self.”  Learning of a change in the type of MBC hasn’t stopped her positive attitude. The fight must win over cancer!

Stephanie joined Komen Oregon as a Portland Race for the Cure committee member in 2015 and has since moved on to be the Chair of the Hope Village in 2017. We are very grateful to know and work with someone like Stephanie Lipman. She is More Than Pink!