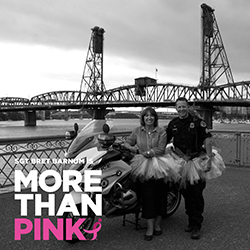 Sgt. Bret Barnum has been at the Portland Police Bureau for 24 years. Most of those years were spent in traffic where he often worked at the Portland Race for the Cure. While enjoying the community, he didn’t think too much about all the thousands of survivors in pink, until his mother Cheryl was diagnosed with breast cancer.

As a result, she started participating in the Race in 2002. Now, at the beginning of each Race, the first thing he does is find his mother and take a picture with her team in his pink-themed, Police-issued motorcycle.

Bret is especially proud of the #PPBPink campaign. That’s when the Portland Police Bureau wears pink patches and other pink pieces on their uniforms during October in honor of Breast Cancer Awareness Month. Sgt. Barnum says that the color pink starts conversations about early detection and the importance of access to treatment. He noted that people react very positively to the pink and he often gets a thumbs up from the people he encounters on his pink bike. He appreciates that he can honor his mom and the community as a whole.

As with many children of breast cancer patients, it was important to Bret to be there for his mom by checking in on her and picking up the slack when she needed it. His mom taught him to watch out for other. If something isn’t right–you step in and help, which is exactly what he did for his mom. When Bret felt like his mom was upset about her illness, he said to her, “Mom, you can either beat it or you can let it beat you. And, I’m not going to let it beat you.” She had to get better because losing her was not an option for him. Bret says, “For a long time, you are pretty selfish about your young adult life. Your career and family is even more important in times of need.” He continued, “We all go through issues, so don’t be too shy to accept help and let people do things for you.”

Bret is grateful that the illness brought him and his mom closer together. The two of them have plans to go skydiving together along with other members of Cheryl’s Race for the Cure Team, Pinking of You. They even have pink parachutes!

My name is Cheryl Barnum and I’m so thankful and proud to say that I’m a survivor of breast cancer. As with all survivors, we owe a tremendous amount of thanks to our family and friends for their support and prayers.

My son is a Portland police officer and ironically I was diagnosed on the very same day as the mother of one of his fellow officers. Our mutual battle with breast cancer put us together and because of this unexpected event in our lives, I gained a new friend. As my son told me at the onset, “Mom, you can either beat it or you can let it beat you.”  Throughout my treatment, I always kept that thought in the forefront of my mind as it gave me so much encouragement.

After my treatment was completed in 2002, I chose to become active in the Portland Race for the Cure. When I decided to start a team, there were only a few of us that first year. Over the years, my team has grown in numbers. It is now made up of other survivors and good friends who fortunately have not been touched by this disease but found this as a way to help and support breast cancer. The bottom line is that we all are such a great source of encouragement to one another and it has strengthened our friendships forever.

In naming our team, we always thought that the most important words of encouragement for one another was to say, “I’m thinking of you.” So we named ourselves:  “PINKING OF YOU”