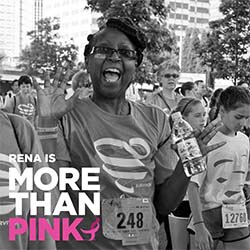 Rena had a mammogram, and it showed that everything was fine. Six months later she noticed that her right breast was itching terribly and the nipple was darker and had become inverted. She went to her primary care physician, and he told her it was normal, just a part of aging. Rena didn’t take his word for it and went to see a nurse practitioner. She examined Rena, told her everything was fine and she should just get some itching cream.

That still didn’t resolve things for Rena. She felt that something wasn’t right regardless of what the doctors said. She started doing some research on Web MD, and when she entered her symptoms, the first thing that popped up was breast cancer. Rena insisted that she be given a mammogram which was followed up by an ultra sound. The doctor confirmed she did in fact have breast cancer.

The doctors wanted to do a lumpectomy but her instincts told her that she needed a double mastectomy. She went back and forth with the doctors several times on the issue but she was adamant that she was right. On the day of her surgery, the surgeon came in and said, “I see you’re down for a lumpectomy.” Rena corrected him and said, “No, a double mastectomy.” Instead of going into surgery she had another exam that didn’t show anything. They did an iodine test, and then she went into a 4 ½ hour surgery. When she was in recovery they came and told her that they had never seen so much cancer in a breast. She actually needed a radical mastectomy and had Stage 4 breast cancer. When the surgeon came to see her she asked, “What were the next steps? Radiation and chemotherapy?” The doctor said, “You can do that, but it won’t help you.” She was told she probably had two to four years to live.

That was in 2008, and Rena has been cancer free since 2009. The doctor’s words didn’t bother her one bit. Because of her strong Christian faith, Rena knew she wasn’t going to let anyone other than God determine her death. Rena went through chemotherapy and radiation with the support of her family including a niece in nursing school.

Rena wants everyone to know how important it is to be your own breast health advocate and follow your instincts. “Listen to your intuition. If something keeps telling you it’s not right, then get it checked out.”

Although Rena Montgomery has no familial history of breast cancer, she has been going to Portland Race for the Cure with her family since it began. She has t-shirts from almost every Race for the past two decades and is proud to now include some pink ones among the white.