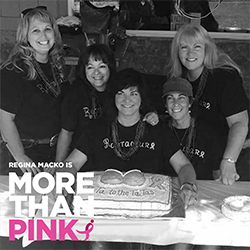 Regina has been a caretaker many times in her life. Her aunt and grandmother both had breast cancer, and even her uncle had cancer. Regina walked in Race for the Cure for many years before moving to Bend in 2005. After she moved, she had her first mammogram and regularly did self-exams, but as Regina pointed out, she probably wouldn’t have been able to find a lump because as she candidly shared, she had rather large breasts. Regina was a 36 H.

She noticed that her left breast was growing rapidly. In fact, it was a full cup size larger than her other breast—it was an I. Regina joked that every time she walked into a room her breasts were saying “HI” before her. Great joke aside, this concerned Regina so she went to see her nurse practitioner. They did a mammogram and ultrasound and ended up finding something in the right breast–the one that was an H. Her doctors and friends all suggested she just go with the lumpectomy option, but Regina knew right away she wanted to do a bilateral mastectomy. She instinctively knew that would be best for her, and besides, after having such large breasts her entire life, she was ready for a change. Sure enough when they did the surgery they found 2 lumps also in her left breast. The surgeon told her she was brilliant! She asked to get that engraved on a plaque.

Regina approached the entire experience with a sense of humor and positivity. Her friends threw her a “Ta Ta to the Tatas Party” where everyone wore t-shirts emblazoned with the phrase “Racktacular,” which is a nod to a compliment once given to her by a young man several years her junior. Regina credits her friends, “There isn’t any way that I could have gone through this without that kind of support.”

Regina noted that when you hear a breast cancer diagnosis it can be devastating. She had already been through skin cancer and more recently a hysterectomy. When asked what advice Regina would give someone who received a breast cancer diagnosis, she said, “It’s not the end of life. Your path has changed and that’s okay. Sometimes you have to sidestep because there’s a rock in the trail, but you keep going.” She adds, “Your breasts don’t define you as a person.”

Now that Regina doesn’t have the very large breasts, she has started running as part of her physical therapy and is looking forward to joining her sister, an accomplished marathon runner, in upcoming races.

Since Regina lived in Bend, Oregon, she had to travel to receive treatment. She thanks Komen Oregon and SW Washington for the financial assistance they gave her through their Treatment Access Program. The financial assistance she received was just what she and her husband needed to pay for utilities and food while in treatment during the winter.