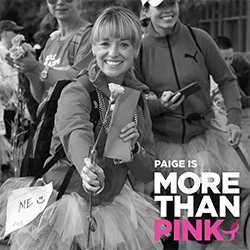 In 1999, Paige Berty was 31 years old when she felt a lump. This was nearly twenty years ago and usually a 31-year-old isn’t going to be too concerned, but Paige’s mother was diagnosed with breast cancer at 42. An ultrasound confirmed that it was a tumor and two days later, Paige was having a lumpectomy. She was at the airport when she got the call that she had breast cancer and it had a high multiplication rate. By the following week, she had a team of doctors and her case was being reviewed by a tumor board. Within two weeks, she had her 8-hour surgery including a mastectomy, node removal, and reconstruction. This was followed by chemotherapy.

There wasn’t a support group for young breast cancer survivors at that time, so Paige helped start one for patients 40 years old or younger. They would go to dinner, talk about their journey, and participate in Race for the Cure. Paige and other young survivors found comfort in being around like-minded people who could identify with what they were going through. Paige had a hard time losing her hair and not just because she has beautiful hair or out of vanity. It’s because she felt that when people saw her without hair they identified her as being sick. When she lost her hair, her boyfriend Bill shaved his head too.

Her mother’s breast cancer came back when she was 62, and sadly, she passed away. Because of her family history, Paige sees her doctor twice a year. Paige sometimes worries that her breast cancer could come back and she could pass away at an early age like her mother did. She sometimes feels like she’s living on borrowed time. Paige stays positive and doesn’t take anything for granted. Having breast cancer slowed Paige down in a very good way. She now takes the time to enjoy her backyard and has a fresh look on life and the importance of the small things. Paige says, “I truly believe that everyone can muster the courage inside to fight breast cancer.” She continued, “You’ll find strength in places you didn’t think you had.”