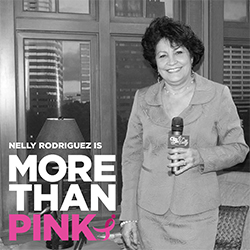 Not so familiar to her viewers was her fight with breast cancer over 19 years ago.  She says, “I am so lucky!  The breast cancer was caught early with a mammogram.  I had no other symptoms, so I wouldn’t have known and it could have spread.”

Nelly underwent a lumpectomy immediately and then followed up with Tamoxifen, a commonly used hormone therapy, for 5 years and is cancer free today.  She encourages everyone to be diligent about screenings since early detection is the best way to survive this serious disease.   She adds, “We are so quiet when talking about breast cancer in the Latino community.  I try to bring up the conversation, so we can save more lives.  My mother also had breast cancer, and I talk to my daughter about getting regular screenings.”

In past years, Nelly participated at Race for the Cure as a reporter, but didn’t actually walk the course until recently.  Now she says, “I loved it!  From now on, I’ll walk every time.”

An energetic force in local television, Nelly has played a leading role in local broadcasting.  Nelly Rodriguez created Cita Con Nelly more than 15 years ago, and it was the first Latino program for commercial TV in Northwest Oregon and Southwest Washington that was recorded, produced, and broadcasted in Spanish.  Airing on Saturday mornings on Univision at 11am and Mundo Fox at 11:30am, Cita Con Nelly celebrates the Latino culture and brings music, sports, cuisine and other interesting news to her viewers.