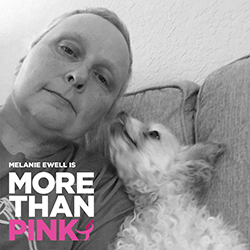 Summer is supposed to be all about fun in the sun, family vacations, and lazy days, but that wasn’t the case for Melanie Ewell. She felt a rather sizeable lump in her left breast, but it grew so fast and so big that she was sure it must by a cyst. Her first radiologist thought so too. But the second radiologist knew better and a biopsy revealed that wasn’t the case. On July 12th 2016, Melanie received the call that she had Triple Negative Ductal Stage 2B Breast Cancer and in that moment, her whole world came crashing down.

But, not for long. Because Melanie decided she wasn’t going to let this get the best of her. The weekend of her diagnosis she was scheduled to go hiking with her daughters, and they decided to keep those plans. It was an emotional day. She had a billion reasons to beat this and a billion reasons to live.

After a lifelong career in law enforcement and social service, Melanie was used to having to put on a brave face. She said, “You had to wear your confidence like a mask. The public needs to believe that you are in control.” And, people did see her that way, even if she didn’t feel like that on the inside. Having breast cancer redefined Melanie. She became the strong person on the inside that others always saw.

Melanie credits her team of doctors for much of that confidence. She says, “I never felt any doubt about what they told me to do.” She feels for people who don’t like their team of doctors by saying, “I understand that people are limited by insurance and financial factors, but their job is too important to not like your doctor. If you doubt your doctors, it’s very easy to doubt yourself.” Melanie can’t say enough about the team at Providence lead by Dr. Kelly Perlewitz and Dr. Janelle Yutzie, as well as her plastic surgeon, Dr. Elisa Burgess.

Melanie was too sick from chemotherapy to participate in Race for the Cure the year she was diagnosed, but a woman she didn’t even know very well walked in her name. Melanie walked this year, and her team, Live Long and Prosper, raised an impressive $564. Melanie is scheduled to have what she hopes will be her final reconstruction surgery in November this year.  She looks forward to being a full-fledged survivor by the 2018 Portland Race for the Cure.