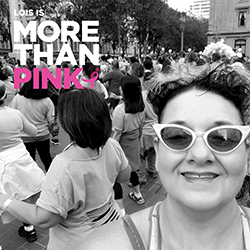 Life was going along just as Lois Milare wanted it to. She had a career she loved as a professional hairdresser, and she was happy with her boyfriend of 22 years, Kelly. Kelly asked Lois to marry him dozens of times over those two decades, but marriage just wasn’t that important to her. At least it wasn’t until a matter of health insurance became an issue. It was actually Kelly’s health that Lois was worried about so she made him a deal, she would marry him and go to a doctor if he would.

Lois had been doing hair for 40 years. She had 3 generations of clients, and although she loved working with them, she never thought of herself as more than a footnote in their lives. It never occurred to her that those people would be the ones taking care of her. Her client Cindy is an MRI Technician, and she rearranged her work schedule to take every Friday off so she could go to Lois’ chemotherapy appointments. Other clients happily moved their appointments to days that Lois felt well enough to work, and every one of them stayed with her, even if it took weeks or months longer than usual to see her. Lois said, “I was more to these people than I ever thought I was and that gave me more meaning to my own existence. I saw myself through their eyes.”

Having breast cancer gave Lois a new lease on life. She started looking outside of herself on her journey back to health. She got involved in a lot of charities, fundraised for Veterans, and volunteered at the Oregon Humane Society. Lois realized that the world is bigger than just her. She said, “By doing these little things she can help give back to the community at large.”

Lois put her artistic abilities to a unique use when she turned her port (where the chemo is attached) into a piece of jewelry. She also designed a dress and hat to wear to Race for the Cure that she had her friends and family sign to keep them close to her during the walk. Lois is thrilled that dogs are allowed to officially register for the Race for the Cure, her two dogs are like family to her and will also be dressed in pink at all the Race for the Cures to come.