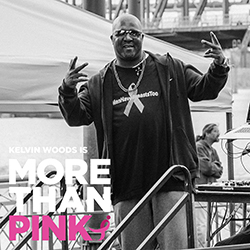 A father and a grandfather, Kelvin never thought he’d hear the words, “You have breast cancer.” After all, 1% of cases occur in men. Once diagnosed, he reached out to Komen Oregon and SW Washington to get involved. He is adamant about advocating for your health before you get sick and go to the doctor.

In early Spring of 2014, Kelvin felt a hard bump on his chest above his right nipple. He knew it was unusual, and when it didn’t go away within the next month, he made an appointment with his primary care doctor and was glad he didn’t procrastinate any further.

At the time, Kelvin wasn’t concerned about the bump being life threatening until he started researching the medication that was initially prescribed. Kelvin researched and discovered it was a cancer treatment and asked if his doctor suspected cancer. The medication didn’t change the situation over the next three months, so he was referred to a surgeon who immediately scheduled a biopsy and tests.  Within a couple of weeks they had the diagnosis of breast cancer.

The mass was isolated and removed immediately and eight treatments of chemo were recommended as the next step in the treatment. Kelvin admits the chemo was tough, yet he was determined to keep his life on track. Kelvin’s advice is, “Try to enjoy what you can. Whatever that is. I wasn’t depressed during chemo – I was going to do the same stuff that I always do.  It is just that simple.”

As an administrative assistant to the CFO at Kaiser Permanente’s Sunnyside and Westside Medical Centers, Kelvin says, “I chose to work. I didn’t want to sit at home, so my boss arranged things where I had the ability to work from home when I didn’t feel up to going in. That was a blessing!” Kelvin only missed a few days during treatment even though the first four sessions of chemo were really tough because of nausea.

Kelvin had been warned that the next side effect was deep bone pain. He says, “They weren’t kidding! I could barely move and was really sore with an ache through whole body.  No matter what – the pain was still there.”

As a father of 5 children (2 biological) and a grandfather to 4 young grandsons, Kelvin is also a passionate part time DJ named “Doc Rock” and does numerous family friendly events in the Portland area.

Once he was diagnosed with breast cancer he reached out to Komen Oregon so he could be involved in the Race for the Cure and share with other survivors. He ended up being the DJ at the finish line! “The event didn’t have music to greet the participants at the finish line and I was so glad to contribute in this way.  As people crossed the finish line I got emotional.  I’m a survivor too!  I was still going through chemo at my first Race and was so amazed at how many fighters were out there on the course.”

Because the cancer was detected in the early stages, Kelvin’s treatment was effective. He is adamant about being an advocate for your health. He says, “As an African American male, I think we tend to wait until things are more serious.”

Kelvin is also a member of our Ambassador Board! He is More Than Pink!