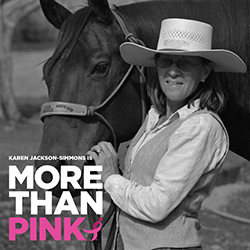 Karen doesn’t think her breast cancer story is as important as other people’s because her treatment was easy by comparison. But, her story is important.

It wasn’t time for Karen’s mammogram, but since she lives in a rural area, roughly 42 miles away from her doctor’s office, she likes to combine as many medical appointments as possible. A small spot was detected on her mammogram, and the biopsy revealed that the lump was cancerous. During her surgery, it was determined that the cancer had not spread and the only remaining course of treatment was four weeks of radiation.

Karen was diagnosed when she was 58 years old and lived 3 ½ hours from her treatment center. Fortunately, Karen had friends she was able to stay with them during the week. Every Monday morning Karen would pack up one of her cattle dogs and her new puppy and drive to her friend’s house, go to radiation each day, and then drive back home on Friday.

The fuel cost was a burden for Karen. Fortunately, her Nurse Navigator told her about Komen Oregon and SW Washington’s Treatment Access Program (TAP). Through TAP, Karen received gas cards that covered the cost of her trips. During her second week of radiation it became clear that Karen needed new tires, and she gives credit to Komen Oregon and sponsor Les Schwab Tire Centers who helped her buy new tires during her second week of radiation. Completing treatment wasn’t a question anymore. It became her number one priority.

Karen counts her husband, friends, and dogs as a great support system during her breast cancer journey. She created a Facebook group called Karen’s Support Team that featured daily posts about what she was doing and how she felt. Karen teared up as she told her story about one friend in particular, a fellow cancer survivor, who Karen called as soon as she received her diagnosis. Five days after that phone call Karen received a box in the mail that she called a package of support. It included a necklace, a coffee mug that said hope, photos, items she would need when she was away from home, and sentimental objects she could look at and know that her friends were there for her.