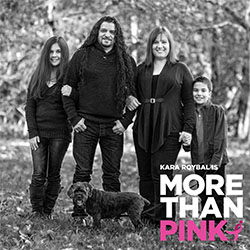 Kara was in the shower when she felt something that caused her some concern. She waited about a month to see if it would change, and when it didn’t, she went to see her doctor. Initially they assumed, it was nothing since she was so young (32 years old) but went ahead and did a diagnostic mammogram, ultrasound, and biopsy. It turned out there were three spots and all were malignant. Kara was not a candidate for a lumpectomy because she needed all the lymph nodes in her right arm removed. Kara made the decision to have a double mastectomy just to get it done and put it behind her.

Kara describes herself as level headed, and she approached her breast cancer journey in a direct manner. She created a blog about her breast cancer journey to keep friends and family aware of her appointments and results. It was less about journaling her thoughts and emotions and more about providing the facts. Kara did a lot of online research and explored both the good and the bad. She encourages people to only read what they can handle. She warns that it’s easy to get lost down a rabbit hole of information that can make some people feel worse about their situation.

The only time Kara really felt herself getting emotional was when it came to her children. She had two young children when she was diagnosed. Kara says she wouldn’t have told them she was sick at all were it not for the physical changes that were coming. To this day Kara finds herself getting upset if she thinks about what it would have been like for her children if her treatment had gone differently. As for her, life went on routinely as well. Kara worked throughout her treatment and only took a short time off for surgery. She credits the company she works for, iHeartMedia, with being very supportive of her. During this process Kara learned that she had a lot of inner strength, she learned that she could persevere and not let anything get her down.

In her quest for knowledge, Kara attended Komen Oregon’s Breast Cancer Issues Conference and found it very informative. Kara’s family put together a team for Race for the Cure that year to show their support. To this day, when her family meets someone who has been diagnosed, they will share Kara’s blog with them. It’s a straightforward, matter of fact read that lets you know what happened and what you might expect. In a way, that is completely Kara, since the information wasn’t anywhere for her to find it, she created it herself. She is happy to share it with anyone going on their own breast cancer journey.