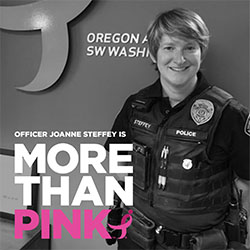 I was diagnosed at age 41. I got the call saying, “It is cancer.” Although I knew what the doctor had just said, I had her repeat it. I felt the walls closing in. I was leaving on vacation to Hawaii two days after my diagnosis. The trip was very emotional.

As a Police Officer at the Port of Portland, I didn’t know how my first day back to work would be like. My coworker Traci came into the office to support me even though it was her day off. She went with me to the HR department. I asked what I needed to put on my paperwork. I was told to put cancer. It was the first time I really had to write it or see it on paper . . . CANCER. It was a lonely day. None of the officers said anything to me. They did not know what to say. There was an hour left in our shift when finally, someone said, “Sorry to hear about your cancer!” Once he said that, all the other officers said they were sorry to hear about the cancer too.

My breast cancer journey showed me how much I was loved. My mom said one of the most heartwarming moments was having 20 of my friends waiting with her while I was in surgery. I stayed in the hospital for three nights, of which I never stayed a second in my room alone.

What I have learned about myself is how strong I am. Throughout the process I never thought I was going to die. I knew I was going to kick ass and beat cancer! If someone comes to me who has recently been diagnosed, I let them talk. I would make sure they know that things will be okay, assist them however they might need, and go to appointments with them. I advise them to talk with others who have had breast cancer. Use your resources!

One aspect of breast cancer that does not come to mind at first is how to continue your job after you have beaten the disease. I have had reconstructive surgery twice since beating cancer. As an Officer for the Port of Portland, I must wear a flac jacket every day of work, which is lot of weight on your chest. Wearing the flac jacket caused me to have to have reconstructive surgery until I decided not to have implants at all. This would be my “NEW NORMAL!”

Joanne Steffey is what makes the month of October about taking action and being More Than Pink by donating! She was excited to share with us what the Port of Portland Police Department will be wearing during the month of October in honor of National Breast Cancer Awareness Month (pictured below)!