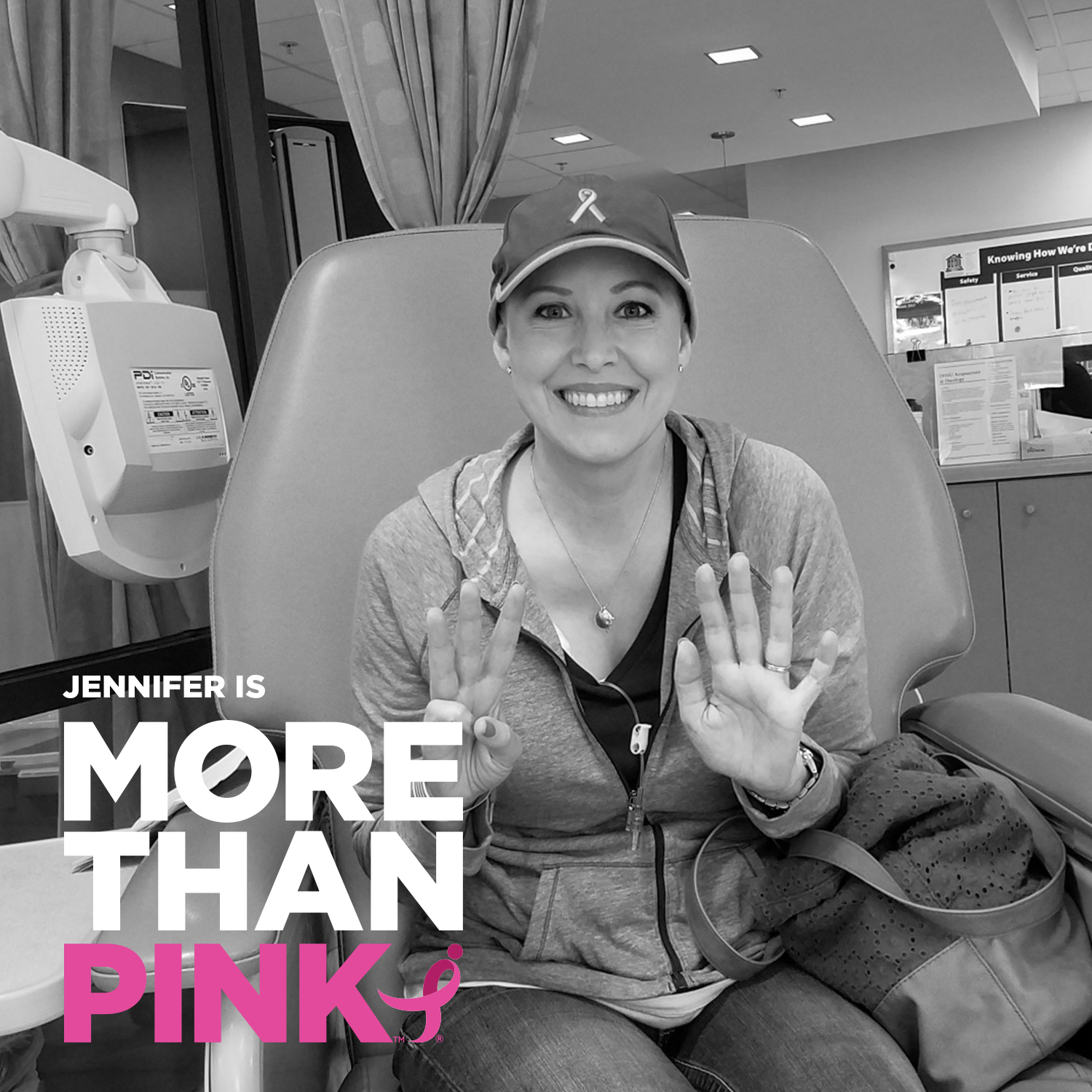 Jennifer Ebner was a recipient of our Treatment Access Program, which provides gift cards for gas, lodging, and food so that people in rural communities can get to breast cancer treatment. This is her story:

In May of 2017, at 39 years old, I was diagnosed with hormone receptive Invasive Ductal Carcinoma.  I felt completely healthy and it came as a complete shock.

A few months prior to my diagnosis I noticed a tiny “dimple” in the skin on my left breast.  I couldn’t feel a lump, so I assumed it was probably just skin or tissue changes due to age.  When it didn’t go away for a couple of months, that “little voice in my head” told me to be better safe than sorry and have it checked out; I still assumed it was nothing serious.  I wasn’t even 40 years old yet, so there was discussion if I should even have a mammogram or not.  It was finally decided that I should, which led to a diagnostic mammogram and an ultrasound a few weeks later.  After biopsy confirmation, my journey with breast cancer officially began.

Much of the following year has been a blur.  Life has felt as though it was put on hold as we tracked down surgeons, an oncologist and began talks of my treatment plan, surgeries, radiation and hormone therapy.  I quickly realized how little I knew about breast cancer.  I was very blessed to have been referred to the best breast surgeons and oncologist I could have hoped for; all of whom I trust and respect so much!  Seeking out a healthcare team that listens to you, believes in you… a team that you completely trust and feel comfortable with is one piece of advice I would give to any others diagnosed with breast cancer.  Living in southern Oregon and having a care team in Portland created a logistical and financial challenge, but the confidence I had in their plans and care have made every long drive and hotel stay worth it!  A nurse navigator informed me of the Susan G. Komen Oregon and SW Washington Treatment Access Program when I was beginning chemotherapy.  What a huge relief it was for me and my family to know there’s assistance for some of the costs associated with traveling to Portland for chemotherapy treatments, surgery and checkups.

I received 8 rounds of chemotherapy beginning in June of 2017 and ending four months later in September.  I then underwent a double mastectomy and auxiliary lymph node dissection with reconstruction in October.  Five to six weeks of radiation was to follow surgery, but my consultations led to a discovery that traditional radiation wasn’t the best option for me.  We were referred to the SCCA Proton Radiation center in Seattle, Washington and I received 36 radiation treatments there.  My treatments were Monday through Friday, so my family and I relocated to Seattle for the 7 ½ weeks of radiation treatments.  I completed my radiation therapy the day before my 40th birthday in February of 2018.  What a way to end my 30’s; I felt so very fortunate to have turned 40!  A cancer diagnosis gives you a new perspective on so many things, not the least of which is the privilege of getting to turn another year older.

With chemotherapy, my primary surgery, and radiation now behind me, I’m now on a daily regimen of targeted and hormone therapy.  I still have one more reconstruction surgery remaining.  My most recent scans show that my treatments have been successful!  Breast cancer research has led to the availability of so many treatments and I am very hopeful that someday a cure will be found.

Being diagnosed with cancer is definitely a life changing event.  I have tried to stay positive through the ups and downs of the past year and I’m fortunate to have a positive support team cheering me on.  My husband has been by my side through every step of this and without his love and support, this past year would have been a lot different for me.  We celebrated our 20th anniversary two days after my 3rd round of chemo. I’m blessed to have been loved and supported every step of the way and during every phase of treatment. Our boys, ages 14 and 9 have amazed me with their resilience and continued positive attitudes through a tough and challenging year. Our families and friends have been so generous with their love and support. This has been one of the most challenging years of our lives, yet we have experienced so many great moments during it.  We have truly treasured every day. Prayers have continually been answered and we’ve been blessed beyond measure.

I would encourage others who are diagnosed with breast cancer to be their own advocates, to surround themselves with a positive support and healthcare team, and to reach out to others who have already gone through treatments.  Talking to survivors has been so encouraging and helpful for me. I hope to encourage others who have been recently diagnosed and give them hope, so that they too can make it through this challenge. 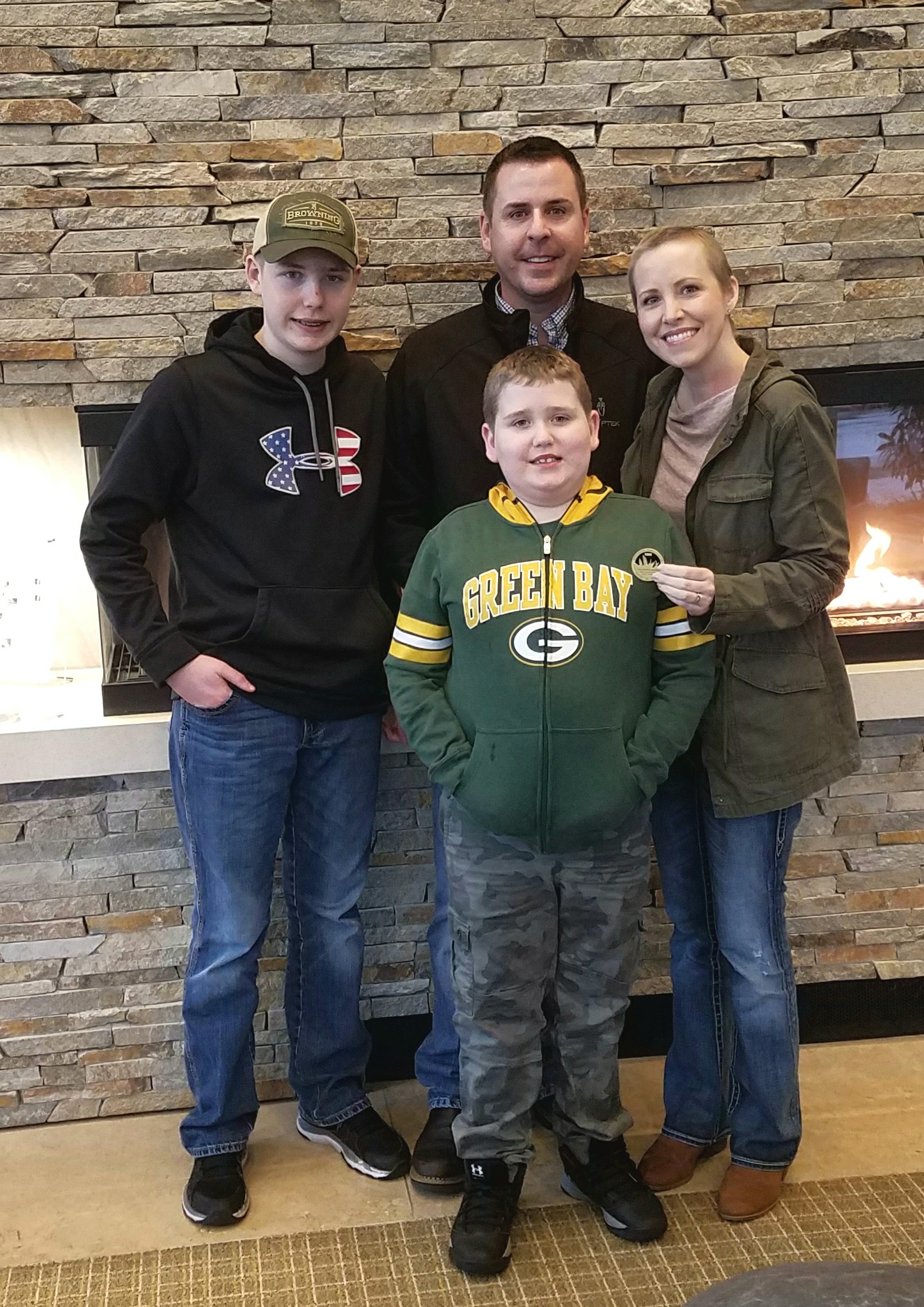