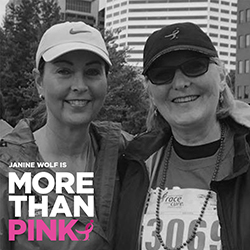 Janine Wolf almost expected to get breast cancer.  Her sister Kathy had it and their great grandmother had passed away from it.  She didn’t have a negative attitude, and she took good care of her health, but she couldn’t help feeling like she was next.  Janine had regular mammograms for years and then in 2003 they found a funny spot on her ultrasound.  A surgical biopsy showed that she had stage zero ductal carcinoma.

Janine had radiation, and her doctors told her that her cancer was treatable without a mastectomy.  She continues to see her Compass Oncology team regularly and so far, things have gone very well.  Janine’s journey with breast cancer was easier than some, but that hasn’t stopped Janine from consistently being one of the Portland Race for the Cure’s Top Fundraisers for several years.

Janine is passionate in the fight against breast cancer.  Since 2010 she has co-captained K103’s “Team Janine” with her sister Kathy.  To date, Janine has raised $34,690 for Komen Oregon and Southwest Washington!  Each year, people who have been newly diagnosed with breast cancer join Team Janine and find comfort in being around people who understand what they are going through.  Janine admits that being a year-round advocate for Komen and running Team Janine can be a lot of work, but she thinks it’s all worth it when you can give comfort to someone who really needs it.  She is beyond grateful that she gets to be that person.

When asked for what advice she would give someone who receives a breast cancer diagnosis she said, “Don’t panic!  Talk to people you know who have had breast cancer.  Seek out a good medical team and get more than one opinion about your diagnosis and best course treatment.”

Komen Oregon is very thankful for Team Janine! They are More Than Pink!