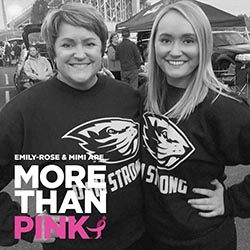 Emily-Rose Wiitala’s mother, Mimi, has always been more than just a mom, she’s been her best friend. Growing up, Emily-Rose was keenly aware of breast cancer. Her maternal grandmother and great grandmother died from the disease before she was born. Race for the Cure was a staple in the Wiitala family fall schedule, where they raced in honor of their loved ones who lost their fights to breast cancer.

In 2013, Mimi was 49, and a newly empty nester with both children away at college. Emily-Rose was 18 and a freshman at Oregon State University, along with her brother Elliot who was a junior. It was February and Emily-Rose’s parents told her they were going to stop by OSU for a visit on their way to the family beach house. Only problem was, Corvallis was not actually on the way. Emily-Rose suspected something was wrong. When her parent arrived, she remembers her mom saying while on a walk through the park, “I have breast cancer, but I’m going to kick it in the ass. Everything will be fine. It is just a bump in the road.” As they walked in the park along with the family dog, Mimi shared her treatment plan.

Emily-Rose struggled with the idea of being in a different city as Mimi and in an effort to support her fears and worries the decision to move out of her dorms and into her sorority was seen as a wise decision. Emily-Rose formed friendships with other sisters whose mothers and grandmothers had their own breast cancer journeys and felt surrounded with love and support through the frightening time. Her sorority offered a great deal of support and a special bond was created with new sisters who are still counted as some of her best friends to this day.

Emily-Rose wanted to be strong for her mom and decided to reach out to all of Mimi’s friends from all stages of her life to ask for photos and words of encouragement to put together in a scrapbook. She knew it would be meaningful for her mom, and she was pleasantly surprised to find out how much it helped her too. Emily-Rose said, “My mom has always been everyone’s rock, but it was our turn to be there for her.” Friends and neighbors brought meals for the family and offered rides. Simply knowing these friends were there for Mimi made it a little easier for Emily-Rose and Elliot to be away. All the while, Mimi kept saying, “This will be in the rearview mirror before we know it.”

When Mimi readied herself for radiation and permanent field markers were placed, she joked that she was the first Wiitala to get a tattoo. Throughout treatment Mimi walked five miles a day with the dog in an effort to reduce the fatigue of radiation, and started listening to audio books to keep her mind distracted.

Since going through treatment, Mimi and her sister have gone through genetic testing and as it turns out they don’t have any inherited gene mutations. They were surprised that they didn’t have the mutations considering the strong maternal history of breast cancer. Even so, Emily-Rose said she will be diligent about going to the doctor and getting yearly mammograms when the time comes. “I realize early detection saves lives, like how it did for my mom.” She added, “This could potentially be coming for me too. My mom caught her cancer at stage zero and if I follow the path the women in my family have, I too hope for early detection.”

The Wiitala family has participated in Portland Race for the Cure in honor of Grandma Sharon and Great Grandmother Dolly as well as numerous family friends. It was particularly hard for Emily-Rose to watch her mother cross the survivor’s finish line this year, the 25-year anniversary of her grandmother’s death. She can’t imagine what it would be like to lose her mom at such an early age, the way Mimi did. Emily-Rose said, “My heart aches for her. She lost her best friend and mom 25 years ago when my older brother was only 6-weeks old. I am thankful for all of the hard work Komen has done to assure I would not have to say goodbye to my best friend and mom, the way my mom did.”

Emily-Rose graduated from OSU with a degree in Human Development and Family Sciences. She knew she wanted to work for a nonprofit and attended a presentation on campus where Susan G. Komen Oregon and SW Washington was talking about internships. One month into the internship she was hired full time as the Events and Fundraising Coordinator, where she finds herself planning and executing Race for the Cure. Emily-Rose and her mom remain the best of friends and Mimi is a frequent volunteer at Komen events. In fact, the entire Wiitala family now volunteers at the Race for the Cure. That’s just the kind of family they are, whatever one person is passionate about or needs support with, the rest of them show up, not because they have to – but because they want to.