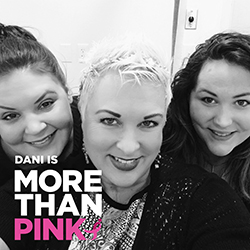 Dani Chambers knew she should be getting mammograms. She was over 40, worked for a company that sponsors Susan G. Komen Oregon and SW Washington, and in general, is just one smart cookie. But there were a few things holding her back, actually two rather large things. Dani enjoyed being a glamour girl and all the things that went with it. She was proud of her 38 Triple D breasts and her long blonde hair. Her biggest fear was to hear that she had breast cancer and would lose these things. Besides, there was no family history so she kept putting off her mammograms. Until a nurse practitioner signed her up for a slot with a mobile mammogram unit. After her screening, she was sent to the hospital. She had breast cancer.

One of the first calls Dani made was to her boyfriend of a year. He said all of the right things, told her he would be by her side throughout the whole journey, but then, he never talked to her again. Fortunately, Dani had her two kids, her family, her friends, and the support of her amazing company, Macy’s. Dani built a successful career in retail for 30 years. She was an executive sales manager at Macy’s in the women’s shoe department and she loved it, but within a week of the diagnosis she was having surgery and had to leave her job.

Her surgery was on July 3rd, 2015. She’d spent the night in the hospital and celebrated the 4th of July there. Originally, they said it would be a lumpectomy, but it had spread to her lymph nodes so they did scans to see what the next steps would be. As it turned out, she was able to keep the majority of her breasts.

When Dani lost her hair, she thought ‘I’m not going to make it through this.’ But then her good friend came over, and they stayed up all night sewing bangs to hats, crying, laughing, and getting through it together. Dani made the decision that she was going to be the hottest, cutest chemo patient there is! Even though she was bald she was going to go for it. She dressed up for all of her chemotherapy appointments and wore full make up.

Dani journaled everything on Facebook, even when she didn’t look good. She wanted to make sure that all of her Facebook friends saw what she was going through so that they would go get a mammogram. Also, Dani admits to being a “Selfie Queen” and that surely wasn’t going to stop just because of cancer!

As a long-time sponsor of Susan G. Komen, Macy’s proved that they didn’t just talk the talk, but they walked the walk. They held Dani’s job for seven months, sent her gift baskets, videos to cheer her up, and told her how incredible her team was at holding things down while she was gone. When she came back to work, they held a party for her including welcome back banners and a red carpet for her to walk lined with people holding pink carnations. Dani was even promoted. She is now a district manager of Oregon and Washington, overseeing the Cosmetics Division.

But it wasn’t always an easy journey. Dani feels that her co-workers and friends were a big part of her recovery. Dani said, “I don’t think anyone understands how lonely and isolated you feel.”  Dani started having anxiety and felt like people were looking at her like they knew she was sick.

Dani had two pretty serious falls during her treatment as a result of neuropathy. She was on pain medication and her entire face was black and blue. She thought ‘I can’t take this one more day.’  She couldn’t share that with most people because she didn’t want to make them uncomfortable.

Dani experienced a lot of pain from the steroids and other medications. She felt zoned out and bloated from the pain medications. Then she tried something rather unconventional. Cupping therapy and charcoal pills. Dani swears by it. Within 3 months she was off of all the pain medication. Dani encourages other people diagnosed with breast cancer to look for treatment options outside of the norm. “You’re going to get better,” Dani said, “You’ve got to fight and keep fighting.”

She also found a great deal of satisfaction in giving back. The first year Dani was going through treatment, St. Vincent’s arranged to have a survivor bring her Thanksgiving dinner. She was so touched by it that she determined right then and there that she would do the same for someone next year.  She spent all of Thanksgiving Day delivering meals to people going through breast cancer treatment who otherwise wouldn’t have one. At one of her stops she met a woman and her husband who lived in an upscale home, and at the next stop, she met a single woman who didn’t have much and was struggling. Dani realized then that cancer doesn’t discriminate. Everyone needed that meal, the hug, and the support from someone who had gone through what they were going through. Someone who could tell them everything would be all right. After all the meals had been delivered, Dani reported to work for the Black Friday sales. It was a very long day, but Dani recalls feeling so accomplished and energized. Dani recently volunteered at the Macy’s make-up booth at Portland Race for the Cure. She says the experience was so much fun. She bonded with all the different women who were also survivors.

Dani has had clear screenings for more than a year but she keeps her blond hair short. She could grow it back but that is not who she is any longer. She’s a survivor now, so she keeps her hair like her attitude—sassy. Dani says that having breast cancer was both a blessing and a curse. “It was horrible, in so many ways. But I have a new-found respect for life. I have more courage than I ever thought I could muster up and more strength than I thought possible. I have an incredible sense of pride. I love myself so much more now.”