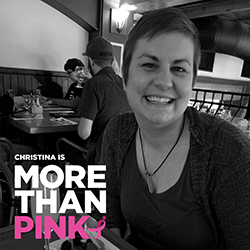 Christina Mazdzer was diagnosed with breast cancer in May of 2016 when she was 42 years old. Christina was to have 4 months of chemotherapy, and then, they would do the mastectomy afterward.

Christina remembers it being quite a whirlwind. Christina’s aunt died from breast cancer, so her physician encouraged her to get genetic testing. It’s emotional for her to share that she has the BRCA gene mutation. Her two sisters, daughter, and mother all had the genetic test, and they all came back positive for the BRCA1, except for one sister. Christina’s other sister was diagnosed with breast cancer a month after her own surgery. Christina credits her family with being an amazing support system for her. Her mother, who lives in Southern California, flew out for every other chemotherapy treatment and supported her during her journey. She also had a hysterectomy because the BRCA1 gene increases the chances of ovarian cancer. A co-worker and friend loaned her a stuffed bear named “Goober McBoob.” Goober was passed to different people fighting cancer after her friend had received it as a gift during her own battle with breast cancer. Goober accompanied Christina to all of her chemo appointments and became very popular with the nurses. He then went to Christina’s sister.

When asked what Christina learned about herself during her journey, she commented that she realized how strong she is, how great her family and friends are, and what’s really important in life. “All the things I used to really worry about seem just silly now,” she said.

Christina’s advice to someone diagnosed with breast cancer is to take not just one day at a time, but one minute at a time. “It’s hard to do that, because it really takes over your life, but try to be present. Be in the moment, and don’t worry about what’s going to happen at the next doctor’s appointment.” She added, “Having a hobby really helps, not only to pass the time in doctor’s office, during treatment and recovery, but it’s also immensely helpful in managing anxiety. I crochet, and anytime I start getting that feeling of being completely overwhelmed by it all, crocheting gives me a much needed reprieve from my own thoughts, even now.”

After Christina was diagnosed, she didn’t even know where to begin but she knew she needed to find resources and support. She found Komen Oregon and SW Washington on Facebook and saw a post about free tickets for survivors to watch a Portland Trail Blazer game. It was after her surgery, so she felt good enough to go.

She participated in this year’s Portland Race for the Cure courtesy of her plastic surgeon. This year Dr. Emily Hu paid for about 30 of her patients and treated them and their families to breakfast beforehand. Christina’s 21-year-old daughter Alexis and her granddaughter Arwyn joined her.

Christina feels really good today. She still sees her doctors every six months, but she says that’s a lot better than the weekly appointments. She added, “It doesn’t really end after everything is done. You have to keep taking one day at a time.”