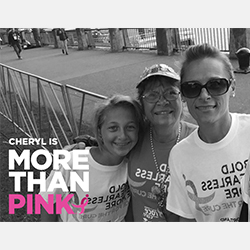 Since Cheryl Lehner was a nurse, she was well aware of common health concerns. She found a mole on her leg that she thought might be cancerous and at the same time she found a lump in her breast. She got a call from the physician saying they needed to see her, and she thought she was going to hear that she had melanoma, but instead, they said it was breast cancer. Cheryl felt like she had been hit by a 2’ x 4’. Cheryl worked with Dr. Strong for 23 years. They took out 25 lymph nodes and all were clear, it hadn’t spread to the rest of her body. Cheryl took oral chemotherapy for 5 years.

When it came to support during her journey, Cheryl credits her husband with being phenomenal. She was stubborn and didn’t want his help but he was there anyway. Her daughter was going to Washington State and would make surprise trips to come see her. She never missed one of her son’s basketball games and didn’t intend to now. She had her surgery on a Wednesday and despite being told she shouldn’t go, she was at Jason’s basketball game on Friday night under the condition she would go straight home afterward. When she walked into the game, all of the coaches clapped for her and Jason said it was all he could do not to break down right then and there. She did go right home after the game, but she wasn’t alone. All of their friends came over and brought the party to her.

Cheryl said that she relies on her faith in God. She did a lot of praying and finally told her self that “I can do this – I can make it through this.” She says that if she didn’t have the family she does and God, she might have fallen apart. She said, “When your family thinks you are going to die, it does give you a closeness that you wouldn’t have otherwise.” Cheryl had two Aunts pass away from breast cancer that died in their 80’s, she’s determined to live as long as they did.

Cheryl was 44 years old when she was diagnosed, and she is 68 now. She has mammograms every year and remains cancer free. She has participated in Portland Race for the Cure since 1998, and her team’s name is “Lehner’s Ladies.” She says it’s amazing to go out and see all of the support and to be with everyone going through the same thing. Cheryl tried walking the Race one year but found it boring so she’s ran it ever since. She even ran it this last year with two broken ribs. She fell earlier in the summer and though she might sit this year out but her granddaughter was having none of that! Her granddaughter cheered her on and they went through the Survivor/Forever Fighter lane together.