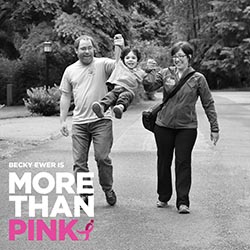 Becky Ewer received the call from her doctor’s office on a Tuesday while she was at work. At just 35 years old, she was diagnosed with Invasive Ductal Carcinoma. Becky was engaged to be married that summer but those plans would have to be put on hold while she began her treatment. After all, she didn’t want to be nauseous in her wedding gown.

What couldn’t be put on hold was the conversation about having a family.

Becky and her then fiancé Greg wanted to have kids and now wondered if that would even be possible. They decided to begin fertility preservation as their one shot at having their own child. They were hoping to get up to twenty embryos but only ended up with four viable ones. Becky and Greg consoled each other and remembered that it only takes one.

That was a rough summer for Becky, her treatment took its toll on her. She had a mastectomy and chemotherapy. She lost her hair and constantly had a terrible taste in her mouth. At the end of her treatment, Becky did her first Race for the Cure as a Survivor. Seventy-five friends and family made up “Becky’s Rack Stars.” Her team was the third largest fundraising team that year, and Becky was interviewed on the main stage. Becky recalls the feeling of crossing through the survivors’ lane at the finish line. She had such joy in her heart to be surrounded by positive energy and compassion. For the first-time ever, she took her scarf off and revealed her bald head. She was immediately greeted by hugs, high fives, and love. Four years later, another Tuesday brought much better news. On Tuesday, May 27th, 2014, Jackson Ezra Ewer was born from one of the four frozen embryos and a surrogate.

Becky thinks it’s important for other people to know that just because they receive a breast cancer diagnosis, it doesn’t mean they can’t have their own child biologically. She recommends you ask your doctors and nurses about your options.