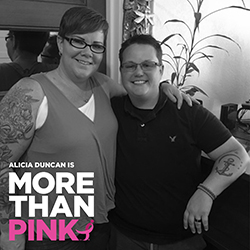 Alicia Duncan was 27 when she found a lump toward the top of her nipple in the shower. As a self-diagnosed hypochondriac, Alicia was pretty concerned, but along with many people in their 20’s, she didn’t have health insurance so she didn’t go to the doctor right away. She did self-exams, called her mom and a friend in medical school, and everyone thought there was no way it could be breast cancer, since she was so young and there was no family history.

A year and a half went by and Alicia was working out regularly. Only instead of feeling more fit, she felt winded all the time. Then she started noticing a pain under her arm and another lump. She thought it might just be a pulled muscle but decided it was time to get an exam.

After an intense day of ultrasounds, mammograms, biopsies, and appointments, Alicia was diagnosed with Stage 2 breast cancer. She had chemotherapy and shaved her head before all of her hair fell out. She went from working out four days a week to not being able to stand or carry her plate to the sink.

Her breasts were a part of her and were supposed to be there. She thought to herself, ‘How did this happen to me? How did I get here?’ She apologized to her body for not listening closer to the warnings and said goodbye to her breasts. Alicia notes, “Cancer takes so much of you. You don’t understand until you are there.”

Alicia’s friends and family came to the hospital. They packed the waiting room. When the surgeon came out and said that they got all the cancer, the room erupted in cheers equivalent to a Super Bowl touchdown. Alicia turned out to have Stage 3 cancer, and it was in the lymph nodes so radiation was required. Alicia spent her 30th birthday in the radiology room where she was greeted with roses, confetti, candy, and cards all in orange—her favorite color.

Alicia has been cancer free for 5 years; however, because of how young she was and how aggressive her cancer was, she won’t be considered in the clear for 20 years. Alicia said, “I always thought I was strong; I was the protector of my family. But I never knew how truly strong I was until I beat cancer. . .and I beat it every damn day.”

She went on to have a hysterectomy because the medicine she took can cause uterine cancer. She got a shot every month for four years. “When you have cancer, you’re always scared,” Alicia said, “Once you lose trust in your body, it’s the hardest thing to get back, every day waiting for the other shoe to drop.”

But not everything that came after cancer was bad. Alicia had been friends with Angela for 5 years before her diagnosis when out of the blue Angela reached out and found out she was going into a mastectomy. Alicia and Angela’s friendship bloomed into a romance, and the two are now happily married.

Alicia made the decision to not have reconstructive surgery but instead to have her breasts tattooed by legendary tattoo artist Mary Jane Haake.MJ, as she is known to her friends, is one of just two artists in the Northwest certified by insurance companies to tattoo nipples on breast cancer survivors.