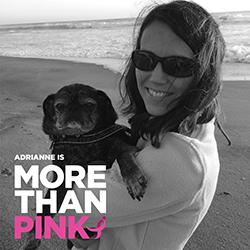 Adrianne Santina was diagnosed with breast cancer just 7 months ago. As she puts it, she was just minding her own business, getting her regular screening as she’d been doing every year when the radiologist thought they saw something and suggested a biopsy. She decided to wait 6 months and get another mammogram. With the spot still being unresolved the biologist insisted on a biopsy. She couldn’t possibly have breast cancer. There was no family history, she lived a healthy lifestyle. But as it turned out, she did have it.

Then, an MRI showed questionable area on the other breast.  Both spots were biopsied and it was found that one breast was cancerous. Now Adrianne had a decision to make, would it be a lumpectomy, a mastectomy or bilateral mastectomy. Her surgeon told her that if it was his wife he would want her to have the bilateral but the choice was hers. Adrianne went with the unilateral mastectomy. “I know I’m very fortunate that I didn’t have chemotherapy or radiation and that I got to keep my breast,” Adrianne said, “Early detection and screenings are so important. The system worked.”

Adrianne says that she feels lucky to have an incredible support system of her husband and teenage son. Her parents who live in Southern California were able to come out and help take care of her. She also discovered how many friends she has and that so many people care. She feels so lucky to have health insurance and access to the care that she needed. That was the silver lining.

Adrianne also took a lot of comfort from Callie, her very spoiled Pug. Callie (who could be heard adorably snoring over the phone during this interview) would snuggle with Adrianne while she was recovering. After the surgery, Adrienne says she basically lived in a recliner chair and her dog was right there with her. “I had to make sure not to move too much because I didn’t want to disturb Callie,” Adrianne said.

“You learn a lot during a time like this,” Adrianne said, “I’m still learning. Cancer is a teacher. I’ve learned that I can endure what I thought was unimaginable. In that regard, it was very empowering.”

After her diagnosis Adrianne frequented the Komen Oregon website and followed them on Facebook. She recently signed up to become a volunteer working events like the Woodburn Fall Fashion Show and the Girlfriends Half Marathon. Adrianne has always been a runner; she ran right up to the day before her mastectomy. She hasn’t been cleared to start running again but looks forward to the 2018 Portland Race for the Cure.