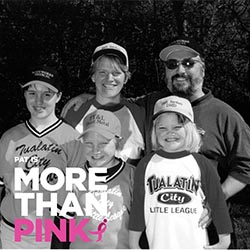 Pat Brown is the Board Chair of Susan G. Komen Oregon and SW Washington. She is also a 16-year breast cancer survivor. Pat had her first mammogram at 40, just like she knew she should. Her doctor told her to get a mammogram at least every two years so she skipped a year and had one the next year. Her second mammogram showed a likely cancerous tumor. Tests were done and they found two cancerous tumors which resulted in limited treatment options. She would have a mastectomy.

Pat remembers her first thought after her diagnosis as, “How would my husband raise the kids on his own.” She was devastated but determined to fight. She was inspired by her family and not wanting to leave them too soon. Pat recalls that one of the hardest things she has ever had to do was sharing the news with her mom and dad. She hated to worry them and telling them made it more real. Her kids were in the 6th, 4th and 1st grade when she was diagnosed. She and her husband Bob took the kids for what became to be called “the pizza dinner.”  They told their children that their mom was having surgery the next day and that everything was going to be ok. Her daughter fell apart. She asked, “Why did this happen to us?” Pat told her, “It happens so you can find out how many people care about you.”

The breast cancer conversation was very different in 2001 than it is today. Pat was embarrassed to tell anyone that she had not just cancer, but breast cancer. Pat adopted an attitude of gratitude by saying, “Be happy for what you have because you don’t know how long you’ll have it.”

Pat is feeling good these days. After 10 years of going to the Oncologist, she admits that it’s both a blessing and a curse to not have to go back anymore. She didn’t know of all the resources Komen Oregon offered at the time of her diagnosis. She knew about Race for the Cure and often participated in it. Pat joined Komen Oregon’s Board of Directors in 2011 because it’s a cause she really cares about. Now she’s happy to let people know that Komen is here to give support through early detection, survivor and fighter support, research, and advocacy.

Pat wants to remind everyone that you will more than likely have family and friends who will be diagnosed with breast cancer. Pat says, “Together we can fight this disease through Komen services and research. There has been solid progress made in our battle against breast cancer but there is more we can do.”