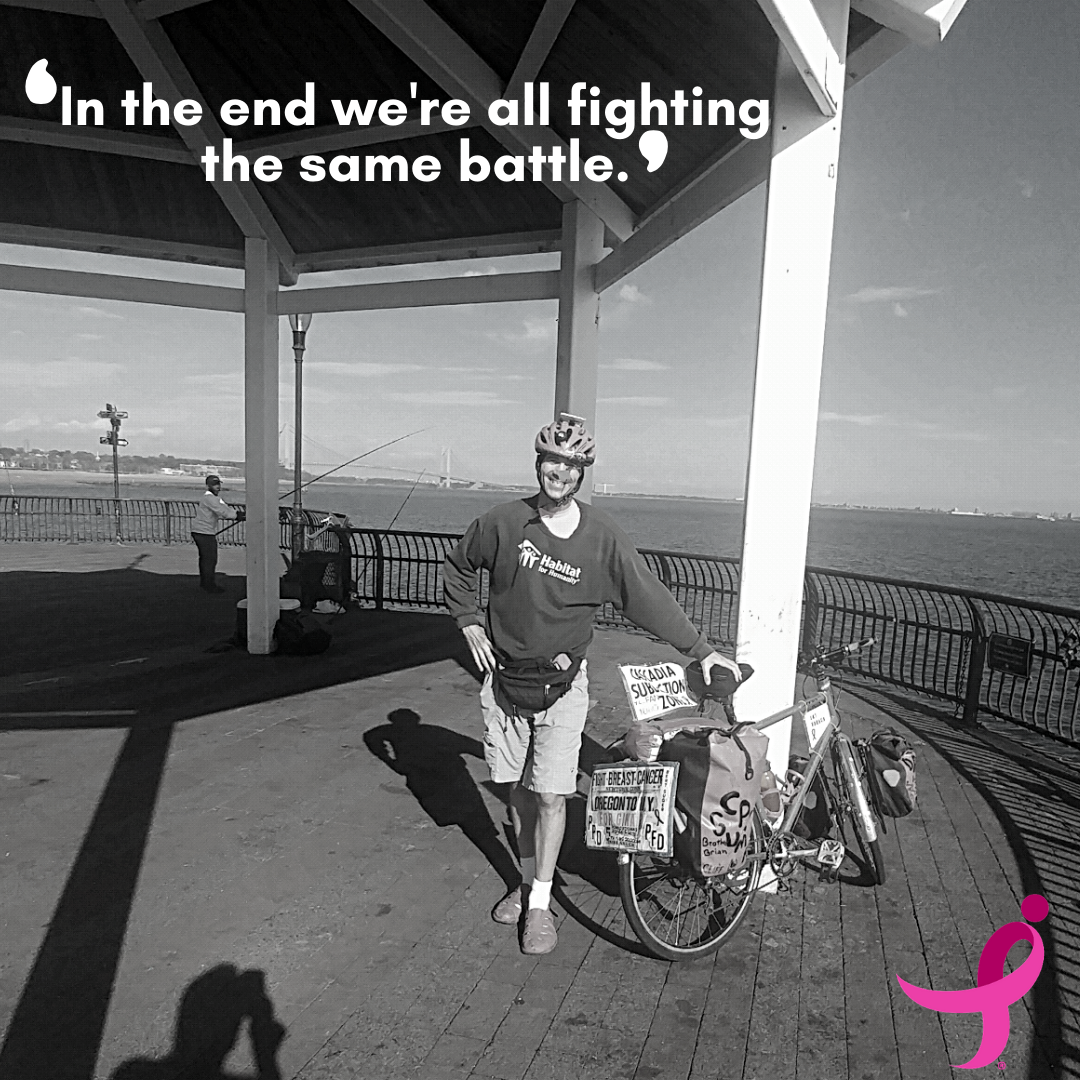 “Gina, I still hear your voice and when I turn around expecting to see you, you’re not there. I pretend you’re talking to me when I’m going through difficult times, encouraging me. I think of what life would be like with you still here. I tear up when I think about what we’ve lost. You would be so proud of all your kids graduating from college, something a parent could feel so proud of. I love and miss you my dear friend, Brent.”

Most people bike for leisure or to and from work. Some bike to enjoy the Oregon scenery. For Brent biking means more.

Brent has biked from Seaside, OR to New York City 6 times over the past 14 years. Literally coast to coast!

Brent’s passion for his annual trip started when his friend Gina passed away of breast cancer in 2004. Gina was diagnosed with stage 4 breast cancer.

Brent says, “if Gina had her mammogram done every year, she’d still be here”.

The Portland native is an advocate for early detection. He bikes across the land to raise awareness in honor of his dear friend.

“I feel very strongly in advocacy, helping people” he explains.

Brent has done just that. He’s been featured on five front page newspapers, 57 news articles, and broadcasted on numerous news networks all over the United States. Safe to say Brent has made an impact. Brent has tremendous pride being able to broadcast his message and raise awareness.

“In the end we’re all fighting the same battle” Brent says gently.

Support makes a tremendous difference in Brent’s eyes. To him, “friends and family are everything—without my support, I would have never made it”.
Brent has learned a lot throughout his journeys. One of which is that “you can’t do anything alone; you shouldn’t even try.” He truly appreciates the power of support.

On Brent’s fifth trip, he was in Boise, ID when he hit one of his biggest obstacles. He hit an extreme state of physical and mental fatigue; “I almost quit and went back”, he says. Motivated by the thought of Gina and encouraged by friends and family, Brent kept pedaling.

Brent is inspired by the life of Helen Keller. From her tenacious attitude to her impressive accomplishments, she is a role model in Brent’s eyes. One quote Brent repeats to get through difficult times during his trip:

“Security is mostly a superstition. It does not exist in nature nor do the children of men as a whole experience it. Avoiding danger is no safer in the long run than outright exposure. Life is either a daring adventure or nothing at all.”
Brent embodies this adventurous lifestyle. With a slight smirk, Brent says “to be honest, I didn’t think I’d survive all six trips”.

Determined to embark on new ground, Brent faces danger head on. He recognizes the obstacles before him and doesn’t hesitate.

The next step in Brent’s quest for a cure is seeking another avenue to help raise awareness. Headed to Australia, he plans to bring his passion and advocacy to international soil. Hopes to meet fellow Oregon native, Terri Irwin of the Australian Zoo!

Diversifying his advocacy strategies, Brent hopes to write a book on his experiences. Be sure to keep your eyes peeled for Brent’s book Exhausted. Soon to be on a shelf near you!

A passionate pioneer in the fight against breast cancer. He is a model of advocacy. Humble, dedicated, passionate, resilient, polite, and courageous, Brent demonstrates what it means to live MORE THAN PINK.