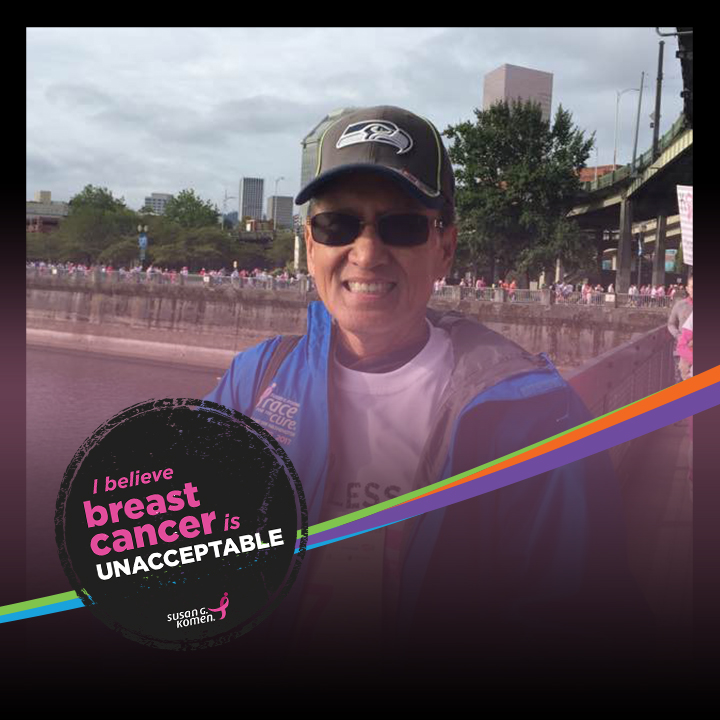 Bob was born and raised in beautiful Hawaii and is a retired Air Force Veteran and flight attendant. For the past 12 years, Bob has been an advocate to end breast cancer. Dedicated to see a change, Bob has devoted a portion of his life to fighting breast cancer for as long as he can.

This devotion to the cause began when his sister, Harriet, was diagnosed with breast cancer 12 years ago. He asked himself “what can I do to help her?” That’s when he got involved with Susan G. Komen.

For Bob, he wants to see the cures and won’t stop until they’re found.

“I want to be a part of the solution,” he said.

Bob’s promise to his sister extends to all those suffering from the disease. Bob will never give up the fight.

Over the past 12 years, he’s made a dedication list – a list of people he can reach out to to let the people suffering from this disease know that someone is thinking about them. Bob is graciously willing to reach out to folks near or far.

In reference to his list, he said “they are not just names, they are people…I want fighters and/or survivors to know that.”

For Bob, volunteering is another big component of advocacy. He says the importance of volunteering is that “you become part of a voice. The louder the voice, the better.”

Volunteering is one way to raise awareness and add to a bigger voice. Being a part of that voice for those suffering from breast cancer means so much to Bob.

Bob’s journey as a co-survivor has not been easy, but he’s learned many valuable lessons. Bob advocates to “never give up on yourself in helping them.”

After all this good Bob has done and is doing, he still doesn’t believe he’s accomplished enough.

“There’s too many people out there suffering from breast cancer” he said. Bob desires to raise more awareness each year and “reduce my dedication list.”